Metallica had revealed its touring plans for 2023 and 2024, including a host of shows with support from the newly reunited Pantera, all of which come in support of a new album, 72 Seasons. The M72 world tour begins April 27 in Amsterdam and will encompass two-night stands in each city. Metallica is pledging not to repeat any songs over the course of each two-show run, which will also feature different nightly opening acts.

In addition, the trek will introduce a new in-the-round stage setup with the Metallica Snake Pit moved to center stage. Fans can also purchase tickets for the entire tour with the I Disappear pass, and those under the age of 16 can gain entry at a discounted price (click here for more information). A portion of ticket proceeds will benefit Metallica’s All Within My Hands foundation, which has raised nearly $13 million for a variety of charitable efforts over the past five-plus years.

Besides Pantera, which is about to play its first shows since 2001 next month in Mexico and South America, support acts include Wolfgang Van Halen’s band Mammoth WVH, Five Finger Death Punch, Architects and Ice Nine Kills.

As for 72 Seasons, it will be released on April 14 and is led by the quick, riffy first single “Lux Æterna.” The 12-song, 77-minute project was produced by Greg Fidelman in tandem with group members James Hetfield and Lars Ulrich and is Metallica’s first album since 2016’s Hardwired … To Self-Destruct. A Tim Saccenti-directed video is out now. 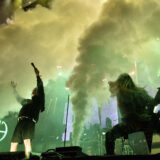 “72 seasons. The first 18 years of our lives that form our true or false selves,” Hetfield says of the album. “The concept that we were told ‘who we are’ by our parents. A possible pigeonholing around what kind of personality we are. I think the most interesting part of this is the continued study of those core beliefs and how it affects our perception of the world today. Much of our adult experience is reenactment or reaction to these childhood experiences. Prisoners of childhood or breaking free of those bondages we carry.”

“72 Seasons”
“Shadows Follow”
“Screaming Suicide”
“Sleepwalk My Life Away”
“You Must Burn!”
“Lux Æterna”
“Crown of Barbed Wire”
“Chasing Light”
“If Darkness Had a Son”
“Too Far Gone?”
“Room of Mirrors”
“Inamorata”