As tipped here last month, King Gizzard and the Lizard Wizard is trying out a new, fan-focused touring concept for its U.S. concerts next summer, which will comprise three-night residencies in four cities, plus the Australian band’s largest stateside headlining gig to date at the Hollywood Bowl in Los Angeles.

The tour will begin June 1-3 at the Caverns Underground, a literal subterranean venue about an hour northwest of Chattanooga, Tenn. It will then return to Red Rocks outside Denver, where Gizzard sold nearly 30,000 tickets for three shows last month, on June 7-8, with the second night featuring a separately ticketed early and late show.

From there, Gizzard will play June 11-13 at the new Chicago venue the Salt Shed and then proceed to Carnation Farms just east of Seattle for shows on June 16-18. Founded in 1908, the latter is a fully operational farm spread across more than 800 acres of land and has never hosted a concert of this size and scope until now.

The tour concludes June 21 at the 17,500-capacity Hollywood Bowl, where Gizzard will play its only three-hour marathon set of the run. Tickets for all U.S. shows go on sale Friday. 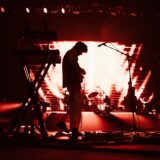 Gizzard frontman Stu Mackenzie tells SPIN that the residency concept was inspired by the band’s ever-growing fanbase, a large percentage of whom travel to more than one gig. “It’s honestly shocking, amazing, and beautiful that all these people come to multiple shows,” he says. “It’s like, fuck! We’ve got to put on something good for them, because they’re the ultimate fans. That started as us trying to do unique shows every night and play a bunch of different songs, and it has evolved into us challenging ourselves to make it even more special. That feedback loop of us enjoying it, more people coming, and the venues getting bigger has led us to that place where we want to do three nights in a city so we can do three different shows, and hopefully a lot of people will come to all three.”

“It really is a feedback loop, because we’re fucking loving it, and it seems like the fans are too,” he continues. “That’s the best creativity, really — when you’re in a feedback loop with your mates on stage or in a giant one with your whole audience at once. It feels like a rare moment of group inspiration that we should take advantage of, so we’re going for it.”

Bassist Lucas Harwood wrote of the tour on Instagram, “USA, we love you — so much so we’re coming back as soon as we can. We all waited so long for our last lap around the country [and] it feels like a such a wild and exciting privilege to be coming back so soon. We like to keep things interesting, different, fun, and unexpected for us but also for you, our fans. So we’ve hand-picked some really unique venues around the country to camp out in for a few nights — set up shop and really get to know the place. Yep, it’s a RESIDENCY tour. Rocks, Farms, Caves, and Salt Sheds. Sounds like an album title? Maybe one day. Capping it all off with a three-hour marathon show at HOLLYWOOD Bowl. WTF? Life isn’t real for us at the moment.”

Following a New Year’s Eve blowout in Wanaka, New Zealand, Gizzard will play a host of shows in Australia, New Zealand, and Europe next year, beginning Jan. 4 in Auckland. As of now, there are no dates announced following the conclusion of the June U.S. run. The band is already working on new material despite releasing five distinct albums in 2022, with footage from its Instagram story on Sunday night depicting drummer Michael “Cavs” Cavanagh hard at work at his kit in the studio.

In other news, the band has announced U.S. theatrical screenings for its 2019 John Angus Stewart-directed documentary Chunky Shrapnel, which chronicles Gizzard’s European tour of that year and features original music from Mackenzie. Most showings will take place for one night only on Dec. 7, with full details available from Gizzard’s Web site.

And while four of the band members returned to Australia following the final Gizzard gig at Red Rocks on Nov. 2, multi-instrumentalists Ambrose Kenny-Smith and Cook Craig have remained stateside for a tour with their other band the Murlocs, which concludes Dec. 2 in Los Angeles.

King Gizzard and the Lizard Wizard