As musical partnerships go, the ongoing link between the Mars Volta’s guitarist Omar Rodríguez-López and singer Cedric Bixler-Zavala is more explosive than most. Prolific and surprising, colliding prog-rock and the folkloric, aggressive and sophisticated, coming together and falling apart, these musicians from El Paso, Texas, have a lasting bond that’s both musical and personal.

It could be witnessed again as the reunited band closed their 2022 U.S. tour with three sold-out concerts at the Palladium in Hollywood. On Sunday’s final night, the two core members of the Mars Volta were as we last saw them, vibrant and self-absorbed, excitable and dressed in black, performing songs from across their seven albums – including their latest, the self-titled The Mars Volta, released in September.

Rodríguez-López and Bixler-Zavala stepped onto a stage covered in fog flooded with blue light, as the band made a searing hypnotic tone, sounding something like one of Robert Fripp’s echoing, groundbreaking loops. The band, filled out with four additional players, then erupted with “Vicarious Atonement,” the opening song from 2006’s Amputechture. It was both soaring and anchored at human scale, as Bixler-Zavala delivered a soulful vocal: “Don’t you pretend/That I’m not alive/My bones never ache/Unless she’s nearby.”

Noisier was “Roulette Dares (The Haunt Of),” from the Mars Volta’s 2003 debut, De-Loused in the Comatorium, and it got the singer wailing and frantically sliding his leather shoes across the stage floor like a flamenco dancer. It’s been a fan favorite for years, and while the band has enjoyed some radio hits (“The Widow,” etc.), familiar hooks have rarely been the band’s central mission. At the band’s best, songs are just starting points, as the players stretch out unpredictably in performance. 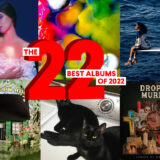 The new album is being described (even by band members) as a shift toward pop, which is true mainly in comparison to their earlier work. It is “pop” in terms of being more immediately accessible, which is another way of saying it’s more subversive, drawing listeners in through more pronounced Latin, Caribbean, and R&B elements, while still following no formulas other than their own.

The decade between Mars Volta albums is blamed on a falling out and drifting apart. Creatively restless, Rodríguez-López has been a startingly prolific artist, establishing new projects with a range of collaborators, from Bosnian Rainbows to Crystal Fairy (with members of the Melvins), while also going deep into filmmaking. Even during the COVID era, he put out a compelling solo collection, The Clouds Hill Tapes Parts I, II & III.

Bixler-Zavala veered into Scientology for a time (as he explained to The Guardian in August) and worked with a project called Anywhere, but the two lifelong friends from Texas could not stay apart. Even when the Mars Volta was theoretically in their past, going on indefinite hiatus in 2012, the singer and guitarist came back together again and again in surprising ways. There was an unexpected second reunion of their early hitmaking hardcore band At the Drive-In, and then the creation of something fiery if less complex and new called Antemasque. Most of it was characteristically noisy and driven, melodic and free.

The return of the Mars Volta was probably inevitable then, as the duo’s most consistently active and satisfying project. The end of the U.S. tour (with a final stop in Mexico City immediately after) only signifies a pause, no doubt, even if Rodríguez-López ultimately finds his interest wandering into new directions. Bixler-Zavala and fans are now accustomed to those whims.

While a frayed rock and roll band at its core, the Mars Volta perform with the obsessive curiosity of free-jazz players, currently blowing minds with a typically vibrant lineup that also includes bassist Eva Gardner and keyboardist/percussionist Marcel Rodríguez-López (a member of Omar’s big musical family). Near the end of the night, Bixler-Zavala sang the achingly tormented “The Widow,” a ballad that comes closest to a band singalong. But right after, Rodríguez-López led everyone into maximum improv, with an epic-length “Cicatriz ESP,” a track from the debut that was stretched out with jazzier patterns and layers of varied beats from drummer Linda-Philomène Tsoungui. Keyboardist Leo Genovese picked up a sax, and dancing at centerstage was Bixler-Zavala, hands hovering in the air, eyes closed, lost again in layers of strange sound and brotherhood.

Few acts can easily share a stage with the Mars Volta in 2022, but Teri Gender Bender has long been comfortable in that world. Best known as the leader of Le Butcherettes, she’s a consistently strange and exciting bilingual rock act originally from Guadalajara. She was discovered one night in Mexico by chance by a traveling Rodríguez-López (who later produced and played in Le Butcherettes) and is currently exploring a new phase as a solo artist, less her original garage rock sound than the electronic-based euphoria on her upcoming double EP, Saturn Sex and State of Fear, due Dec. 16.

At the Palladium, Mars Volta fans greeted her with cries of “Viva Mexico!” Her band included two more gifted brothers of Omar: Riko Rodríguez-López (guitar, keyboard) and Marfred Rodríguez-López (bass, keyboard), who both also play in Le Butcherettes. Gender Bender is also living up to her stage name by wearing a mustache onstage, opening the night with a hypnotic, danceable “Córtate el Pelo” (translation: “Cut your hair”). Her work and stage presence has always been unpredictable, much like her comrades in the Mars Volta. Rodríguez-López and Bixler-Zavala like it that way, and have invented a creative world without limits, leaning forward by any means necessary.