The 5 Best Sammy Hagar Moments to Pair With Santo Cocktails

For decades, Sammy Hagar’s raspy, soulful voice has been one of the most recognizable sounds in hard rock, from his early hits as a member of Montrose and a solo artist to his multi-platinum run as Van Halen’s frontman in the ‘80s and ‘90s. In recent decades, he’s built a successful brand out of his love of good drinks and good times.

Santo is Sammy Hagar’s joint venture with his longtime friend celebrity chef Guy Fieri, who is widely known for making the most of life and not taking himself too seriously. Here’s a look back at some of the greatest songs from Hagar’s five decades of music, alongside recommendations of complementary cocktails featuring Santo Mezquila or Tequila. 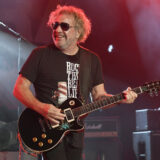 The crimson artwork of Sammy Hagar’s self-titled second solo album and the explosive lead track “Red” led to the record being known as The Red Album, and to Hagar adopting the enduring nickname “The Red Rocker.” The catchy B-side is a natural match for Red Saint, a cocktail that combines Santo Blanco with Sammy’s Beach Bar Redhead Rum, cinnamon, and nutmeg to achieve a deep shade of red in a martini glass.

“Right Now” was a piano-driven creative breakthrough for Eddie Van Halen. Sammy Hagar’s lyrics are a poignant reflection on appreciating the present. And it would be difficult not to live in the moment after drinking Santo Oaxaca, a cocktail served in a zombie glass with Santo Mezquila, lots of rum, and a splash of absinthe.

When Van Halen decided to replace original frontman David Lee Roth in 1985, Sammy Hagar was a platinum solo artist who brought his influences and sensibility to the legendary band’s signature hard rock attack. “Best of Both Worlds,” one of the hits from their first album together, 5150, was an anthem that celebrated the chemistry of two different elements coming together. The Watermelon Cucumber Fresca cocktail puts a fruit and a vegetable together with Santo Tequila Blanco, chilled in a mason jar, for a memorable combination.

One of Sammy Hagar’s biggest hits after parting with Van Halen was an ode to “vitamin T.” And Santo Blanco Tequila gets kicked up a notch with jalapeno rings and Cholula hot sauce in the Diablo Margarita.

Van Halen’s third album with Sammy Hagar on vocals, For Unlawful Carnal Knowledge, closed on a cheerful note with an upbeat song of triumph, “Top of the World.” And that song would pair perfectly with Higher Spirit, which combines Santo Mezquila with lime juice, Aperol, and a garnish of grapefruit peel for a sweet citrus flavor.