Home » News » Recaps » The Best, the Mess and the Rest: Ohana Fest

Ohana Fest has become a staple on the Southern California concert calendar. Taking place on the beach at Doheny State Park in Dana Point, the festival is the unofficial end of summer and the Southland festival season. Last year, Eddie Vedder’s festival returned with not one, but two weekends of music. Vedder and Pearl Jam headlined (Kings of Leon were supposed to as well, but canceled following the death of their mother) and this year, he was joined by Stevie Nicks and P!nk at the top of the bill.

The rest of the lineup featured artists like St. Vincent, Jack White, Billy Strings and more. We took in the sounds under the sun. Here’s everything that happened at Ohana Fest over the weekend.

Collaborations: What makes Ohana different from the other festivals is how frequently artists pop in others’ sets. This year was slightly lessened with fewer impromptu collaborations, but it was thrilling nonetheless. In this case, Vedder hopped up to sing Tom Petty’s part on “Stop Draggin’ My Heart Around” with Stevie Nicks. During his headlining set on Saturday night, Vedder was joined by Heartbreakers guitarist Mike Campbell for a pair of Petty songs to honor the memory of the rock legend who died five years earlier. 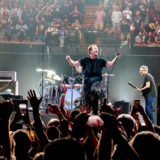 Khruangbin: Ohana has established itself as a home for rising rock, classic rock and singer-songwriters. This year, the Houston-based trio brought a different element altogether. Their blend of familiar elements of classic soul, dub, rock and psychedelia — combined with the warm sensibilities of their sound — was the perfect transition as sunset turned into evening. The groove-heavy band delighted the crowd, many of who were there to see Stevie Nicks’ set right after. Judging by the reception, there’s no doubt that the Ohana faithful who weren’t aware of them can now be counted as the converted.

The festival footprint: You won’t find a festival that’s easier to navigate than this one. Despite the small audience pileups that can happen in a few areas, Ohana is easy to navigate. It’s an underrated element. With its two stages right next to each other that aren’t miles from the crowd along with mostly clear sightlines, taking in the action at a festival has rarely been easier.

Jack White: After blowing away the YouTube Theater in Los Angeles in late May/early June, our March cover star brought his big sound to the beach. Unsurprisingly, he had the biggest non-headlining crowd of the weekend. Amped up and animated, White and his backing band had a blast as they stampeded through a career-spanning 12-song set. After releasing two albums and having spent most of 2022 on the road (with more shows to come), White continues to show why he’s one of the most dynamic performers in music today.

Phone service situation/lack of WiFi: Talk about a disaster. In theory, it’s good to not use your mobile device and take in the music and the moment at a festival. Yet, if you aren’t able to use it at all (without the excuse of a Yondr pouch), it’s a bit of a problem. Throughout the weekend, the service situation was a nightmare, which wasn’t great if you were trying to meet up with people. Also, what festival in 2022 doesn’t have a public WiFi network? That made it tough to share moments from the festival that could have otherwise been shared and promoted special events (as mentioned above) in real time.

Lines: Lines have been a part of festivals since the beginning. At Ohana, somehow, it seemed like the lines were unusually long at every single area — food, bathrooms, bar, and merch. It was a bit surprising since it hasn’t been an issue in years past. The festival didn’t add or subtract any vendors (at least based on the naked eye) so hopefully next year things can move a bit quicker. Maybe it was due to the lack of WiFi/service.

Hammocks: The same goes for having hammocks on site. If your festival takes place on a beach, it makes sense that there will be hammocks to add to that chill vibe.