Black Keys frontman Dan Auerbach’s other band, the Arcs, have returned with their first new music since 2015 in the form of “Keep on Dreamin’.” The track precedes the Jan. 27 release of a full-length album, Electrophonic Chronic, featuring contributions from late band member Richard Swift before his 2018 death.

“This new record is all about honoring Swift,” Auerbach says. “It’s a way for us to say goodbye to him, by revisiting him playing and laughing, singing. It was heavy at times, but I think it was really helpful to do it.” 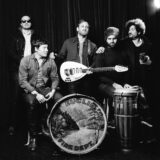 “There are probably between 80 and 100 tracks that we laid down, because we just constantly recorded after we put out Yours, Dreamily,” Michels says. “It was so much fun to be in the studio once again, so we were just making music all the time. I think there was always a plan to make a follow-up record.”

“It’s rare that you meet a group of people that you click with like that, who you instantly bond with,” Auerbach adds. “We were just having fun, making sounds, making music. It was an amazing time for me.”

Electrophonic Chronic will be available in seven vinyl variants, each with a zoetrope-animated picture disc, flocked album art and blacklight luminescent cover. Independent retailers will also offer a limited-edition CD with a bonus patch.

Auerbach continues to shine a spotlight on Swift in other contexts, as the Black Keys joined Nathaniel Rateliff to cover Swift’s “Broken Finger Blues” during a performance at Red Rocks outside Denver in July. The Keys have a few more dates on their North American tour in support of their latest album Dropout Boogie, including tonight (Oct. 13) in Rogers, Ark., and will also perform at Joe Walsh’s VetsAid benefit on Nov. 13 in Columbus, Ohio.