A Day in the Life of… Fatboy Slim

In 1975, American musician and activist Camille Yarbrough released her fiery album The Iron Pot Cooker, a powerful social commentary that gave us the infectious single, “Take Yo’ Praise.”

At that time, thousands of miles across the Atlantic, an eight-year-old Norman Cook is attending Reigate Grammar School and has no idea how much of an impact Yarbrough’s funk classic will change his world down the distant road.

Young Norman would grow up to become Fatboy Slim whose biggest chart hit was 1998’s “Praise You,” a catchy composition that samples the vocals from “Take Yo’ Praise,” making him not only the most successful DJ in the world, but one of the artists, in general, to most likely be playing whenever you turned on the radio or music television during the ‘90s. “Praise You” is both a benediction and song for the ‘90s if there ever was one.

And even more ubiquitous than his catchy songs, Fatboy Slim’s videos were ever-rotating on MTV and music video channels across the globe, revolutionizing the medium with his one-of-a-kind, Spike Jonze-directed videos for “Praise You,” which introduced us to the joys of a flash mob and “Weapon of Choice,” which showed us a side of Christopher Walken we never knew he had. His music scored the mainstream subconscious, dominating the radio and video waves as well as movies (including the memorable dance scene to “The Rockafeller Skank” in the quintessential ‘90s movie She’s All That). 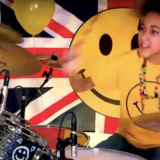 He also might have introduced you to big beat, the aptly named dance music that peaked in its popularity with artists like Slim, as well as the Prodigy, the Chemical Brothers, and the Crystal Method. What set him apart from that esteemed company was his accessibility, the playfulness that radiated throughout his music and his buzzed-about live sets, including an anticipated appearance at the recent CRSSD Festival in San Diego.

With the ‘90s becoming more and more of a happy memory, the impact of Slim’s energy and music is becoming more and more apparent. His music has obviously aged well, however more importantly, the youthful 59-year-old has continued to remix stereotypes of your typical DJ, working with David Byrne on a rock musical (about former Filipino first lady Imelda Marcos), leveraging his music and platform for political causes, and almost restlessly reinventing himself throughout a range of genres (some of his past artistic aliases have included Yum Yum Headfood and Disque Attack).

Still inspired and still making music we love to dance to, here’s a day in the life of Fatboy Slim.

Every day starts with  Coffee.

To get going I always  Snort Berocca.

Before I start working I must  Check socials for an hour.

Currently working on  Collaboration with @artboy.

But I’d really love to be  Sport fishing.

Book I’m reading  Brian Bilston’s Days Like These: An Alternative Guide to the Year in 366 Poems.

If I had to play one album on repeat, it would be  The Beatles’ Abbey Road.

The perfect midday consists of  Finding a new tune on the Internet.

To help get through the day I need  An afternoon nap.

Not a day goes by without speaking to  My favorite dry stone waller.

My daydreams consist of  What if…..?

Currently in love with  LP Giobbi.

Hoping to make time to watch  The Sparks documentary

By my bedside I always have  Sparkling water.