Whitney vocalist-drummer Julien Ehrlich and guitarist Max Kakacek came of age at a time when Usher, Ne-Yo, and Gwen Stefani ruled the pop world. And for the first time since forming the band in 2015, the duo haven’t been afraid to incorporate those inspirations into their own music.

Indeed, their third original album, Spark (out Sept. 16 on Secretly Canadian), filters its gently jangling indie rock through a homespun prism of synth-kissed, head-nodding grooves. That the album was created during the pandemic in the wake of breakups and deaths makes its deeply felt music all the more revelatory, as if Ehrlich and Kakacek happily, accidentally stumbled upon the purest version of Whitney’s sound to date.

In a Portland, Oregon rental house where Ehrlich had landed after the end of a long romance and where Kakacek joined him from Chicago just as COVID lockdowns began, the duo mainlined Stumptown Coffee in the morning, worked all day and forgot to eat dinner until 10 pm, and then kept at it until 2 or 3 am, all the while cycling through Drake videos on YouTube as their in-progress creations played along.

“It reinforced what we were doing, like, man, these visuals look really natural over what we’re making now,” Ehrlich says over oysters and burrata on a beautiful summer evening in Brooklyn. “On songs from [the 2019 album] Forever Turned Around, it felt really natural to see the trees swaying in the breeze. This time, watching people express themselves through dance, whether people were dressing a little more wild or moving with a bit more swagger, made a lot more sense.” 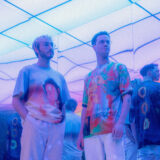 Although the music on Spark isn’t quite ready to soundtrack a night out at the proverbial club, it frequently activates your happy feet while tugging at your heartstrings. “Back Then” is a four-to-the-floor beat away from dance floor bliss, while “Real Love” surfs a delicious bass-and-drum wave while Ehrlich pleads for an honest exchange of emotions in his best Barry Gibb falsetto. “Memory” is Mellotron-flavored, top-shelf uptempo soul, while Whitney’s more contemplative side reaches new heights of expressiveness on the mesmerizing, drum-less “Twirl,” which sounds like the best track never recorded from Bon Iver’s beloved 2011 self-titled album.

Beyond admitted nods to ‘60s legends the Zombies, Spark is really just Whitney “trying to make music that sounds like the early 2000s,” Kakacek says. “Things you heard at formative events like your freshman year dance, when it became, for whatever reason, the most romantic or friend-bonding night. Nothing may have happened, but you maybe had a slow dance with someone you had a crush on while listening to hits by Usher or Ne-Yo. This is our love story to that era of music.”

Adds Ehrlich, “For the first two Whitney records, we were pulling from a specific Light in the Attic/dusty old singles vibe. We just reached a point where we were not inspired by that anymore, which is why the change happened now. This is actually what I’m going back and having the largest emotional response to Usher, ‘Cool’ by Gwen Stefani — these songs that truly shaped our brains and childhood.”

This concept was reinforced as Whitney processed the October 2020 death of Girls member Chet “JR” White, who, along with that band’s Christopher Owens, took Ehrlich and Kakacek under their wing in pre-Whitney band Smith Westerns.

“The first time Smith Westerns ever went on tour and played to real audiences is because JR hit us up on MySpace to ask if we wanted to open for Girls,” Kakacek recalls. “That initial message led to me moving to San Francisco and living with him and Chris for a year and a half, and then touring with them whenever they’d tour. He was the age that I am now, and I was 21 at the time. Our bond was over old records, but then Chris would always talk about Taylor Swift and Miley Cyrus. It helped us understand the process of synthesizing new and old pop music.”

When it came time to record the new material, Ehrlich and Kakacek asked Brad Cook and John Congleton — two producers who’d never met or worked together before — to join forces. The pair had sent Cook the eventual album opener, “Nothing Remains,” right after it was completed, “and he responded the next day by saying it was the best song we’d ever made,” Ehrlich says, “He was so happy we were together because this was when if you got stuck somewhere, you were really stuck.”

“In terms of process, Brad is a lot more of a therapist,” he continues. “His job is to get to the heart of who you are as an artist and where you want to go. Congleton is like the computer and technical wizard. It was a great pairing. I don’t know why it’s something we like to do, but it’s fun to combine so many egos in a room. I think we like the danger of it.” Adds Kakacek, “The nice thing about Brad and John is that they’re both fast: try something out, and if it doesn’t work, move on. I don’t think either one of them would get along with a producer that’s like, no, let’s sit on this part for a couple of hours.”

With a big North American tour kicking off on Sept. 29 in Davenport, Iowa, Whitney are hard at work incorporating Spark songs into their setlist. (A second drummer will join the band onstage, allowing Ehrlich to sometimes just play keyboards and sing.) “The transitions from the old stuff to the new material are what we’re going to have the most fun with,” Kakacek says. “Putting ‘Golden Days’ next to one of the completely dance-y songs like ‘Back Then’ is going to be really fun,” adds Ehrlich.

“We created so much momentum creatively between Max and I through writing this album,” he continues. “Our language and mode of working together is really, really strong. On the second record, we were so precious. We’d really get defeated if we were having trouble coming up with the right part or lyrics. We’d be like, let’s just go home. Through making this record, I don’t know what happened, but that preciousness is gone. Now we know there’s a quicker route towards reaching our expectations for a song, which feels really liberating.”