SPIN Takes Over Bourbon & Beyond

Last weekend, SPIN was in Louisville for the fourth Bourbon & Beyond festival. Teaming with Stand Together Music, the Phoenix, and 1 Million Strong, SPIN took over the Bourbon City Lounge.

Over the festival’s four days, we were on-site to interview some of the biggest and brightest names in music for SPIN IMPACT on topics such as mental health, addiction, education and criminal justice reform. Artists like Greta Van Fleet, Cold War Kids, Lukas Nelson, S.G. Goodman, Elle King, Jukebox the Ghost, Caamp, the Revivalists and more stopped by for candid conversations on these topics. Each artist shared their journey related to the topics and gave insight into how to help solve problems related to the issues.

Some, like Robert Randolph, expressed the importance of being an ally to a cause, while Gary Brewer shared how he’s trying to get the city of Louisville to add more music education classes to schools. Missy Raines debuted a new song about the opioid crisis in West Virginia during her performance and later dropped by to share why the issue is so important to rural communities.

On the festival’s first night, SPIN hosted a party DJ’d by Michelle Zauner of Japanese Breakfast. Hundreds of revelers enjoyed Zauner’s indie sleaze-inspired tunes while they sipped drinks and enjoyed the food. Artists, local dignitaries and VIPs spent a beautiful night under the Louisville sky. 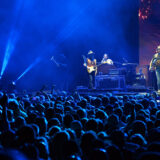 Check out highlights from the festival below.