Home » Features » Interviews » L.S. Dunes Is the Post-Hardcore Anti-Supergroup Born Out of Memes and Friendship

L.S. Dunes don’t sound like a supergroup, and they certainly don’t want to be called a supergroup. But when they took to the Rise Stage early on a Friday afternoon to effectively kick off Riot Fest, one could be forgiven for mistaking them for that.

While other stages saw audiences in the dozens under the midday Chicago sun, the debuting quintet amassed thousands of onlookers.

As vocalist Anthony Green pointed out from the stage, it was a bigger crowd than just about any other band would have for their first show (including all of his so far), but that’s to be expected when the Circa Survive/Saosin/The Sound of Animals Fighting frontman joined forces with guitarists Frank Iero (My Chemical Romance) and Travis Stever (Coheed and Cambria) and the rhythm section from Thursday (drummer Tucker Rule and bassist Tim Payne).

Hundreds in the audience wore their My Chemical Romance gear, while a smattering of Circa Survive, Thursday, and Coheed and Cambria shirts could be found throughout the crowd. 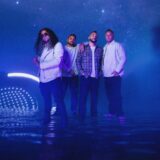 On the stage and their upcoming album, Past Lives, L.S. Dunes sound like they’ve been playing together for far longer than they have been. While they might not have been in the same bands together (except for Rule and Payne), the groupmembers have been friends for longer than many other acts have been around. Rather than focusing on being a “supergroup,” they’re content to exist as a bunch of buddies who people just happen to be interested in seeing perform music.

“During the pandemic, we had a lot of time on our hands,” Green tells SPIN a couple of hours after the set. “It was tough for everybody, but this was just something that I needed so badly. I was looking for people to make music with and to start something that I can put my energy into. This just came to me when I needed it the most.”

“The pandemic was just so rough because music is all we know how to do,” Iero adds (a handful of hours before he’s scheduled to be on stage with My Chemical Romance). “That’s all we’ve ever done. To have that be fucking yanked from you — granted, in the grand scheme of things, it was the least awful thing that happened during the pandemic — but for us, our whole worlds crumbled. This was our lifeline of getting to make music from home, send it back and forth, and immediately get an email response back with another part to work on. It kept us creative and kept our minds off the idea that our world was falling apart.”

Of course, L.S. Dunes wasn’t the only COVID project for virtually any of its members. Iero released a solo EP, Green formed a psychedelic vocal group with members of Taking Back Sunday and Grouplove called Fuckin Whatever, and everyone else’s bands put an emphasis on livestreams and other forms of pandemic entertainment. But no one was busier than Rule, who (in addition to Thursday duties celebrating the 20th anniversary of Full Collapse) ended up drumming on a multitude of other releases, including Iero’s EP and Jim Ward’s solo album.

“We didn’t know how we were going to make a living for our families or if I was ever going to play music for anybody again without being on a screen,” Rule says. “So I bought a whole recording thing for my house and built a studio in my garage to record drums. Then these dudes just kept sending these thirsty riffs, so it was very easy to bounce ideas back and forth. We would go to bed thinking about parts and wondering who was going to send something in the morning. It became almost like an addiction. I was addicted to writing music with these dudes.”

“I think all five of us got to that point where we were just really itching to do something,” Payne adds. “We had all this energy pent up and, miraculously, all of the people that we wanted to work with were having that same experience.”

“And we were all super prone to collaborating, which is rare,” Stever adds. “In other positions, it’s not as easy to just collaborate the way we have. We just started communicating, and there was no expectation of what it was. It was just like ‘Hey, here’s a fucking blank canvas. Let’s all throw paint at the wall and bring the best out of each other.’”

Beyond their shared musical sensibilities, the five members get a child-like thrill from playing with friends outside of their day jobs. Standing between the trees in Riot Fest’s lush press area, L.S. Dunes looks like a t-shirt-clad group of dads excited for a boys’ trip together compared to the heavy makeup and elaborate outfits of the younger acts around them. While plenty of bands might say that playing the nation’s biggest punk rock festival was “the time of their lives” or something along those lines, the guys in L.S. Dunes look like they’re having a blast just cracking jokes and comfortably hanging out with their friends.

“It felt a lot like when you’re in high school and you start a band with just the people that play instruments in your school who you’re friends with,” Iero says.

“We were all fucking texting each other memes and bullshit anyway, so we might as well start a band, right?” Rule laughs.

“I used to dream about how cool it would be to have time to play with Tucker, Frank, Tim and Travis,” Green adds. “I’ve worked with all these guys, and I just admire them so much. To be asked to be a part of a group with them was a no-brainer. It was the most confidence-boosting thing for me.”

While L.S. Dunes may be a dream come true for Green, the singer didn’t even know who was in the band when he began recording the vocals for Past Lives. The band had fully formed and individually recorded their parts before they’d landed on a vocalist, and Rule sent Green some instrumental tracks. But instead of revealing the lineup of the mysterious group, Rule told him that they were just “from some guys in my neighborhood” who needed his voice.

“I was like ‘Dude, your neighbors are good!’” Green exclaims to an outburst of laughter. “If you would have told me that it was all of our friends, I probably would have freaked out.”

“I was doing what was best for you,” Rule deadpans.

In all likelihood, L.S. Dunes will never be a full-time thing. There are just too many moving parts, primary bands and familial obligations that would need to be pushed aside for the anti-supergroup to hit a six-week tour across the States and a month to cover Europe. But it’s equally clear that L.S. Dunes isn’t just intended to be a one-off that people won’t be able to see in concert.

In support of Past Lives’ release on Nov. 11, L.S. Dunes is touring on both coasts, Canada and Mexico as part of their dozen scheduled live shows. While nine headlining dates isn’t exactly a full tour for the career musicians, it does show the value that they put on performing live whenever possible. Hell, even for their debut at Riot Fest (which was only the band’s fifth time physically playing together), Stever and Payne flew to Chicago exclusively for the show, while Iero was happy to essentially open the same show he was headlining.

“Just being up on a stage again and playing music for people, that’s the dream,” Iero says. “I don’t know if I speak for everybody, but that’s all I ever wanted to do in life. I always felt like if I can’t be in a band, then I want to make monster movies. But if I can’t make monster movies, then I have to be in a band. Those are the only things I’ve ever wanted to do, and I don’t know how to do anything else. I played my first show at 13 and went on my first tour at 17. I’ve never not done this. To finally be back in your element, it feels like that weight is lifted off your chest, like ‘Alright, thank God. Things are going to be OK. We can do this.”

All of the live shows and friendship in the world wouldn’t be enough if there wasn’t a legitimate musical connection between the bandmembers. On the first tracks released from Past Lives, like “Permanent Rebellion” and “2022,” there’s cohesion among the five players that flows as well as any of their other bands. While the classic “supergroups” out there often sound like an unbudging mashup of its members’ sounds, Green’s signature post-hardcore combination of melodies and screams fits perfectly over Stever’s shredding leads and Rule’s pounding rhythm — and no one is trying to force the sound of another act where it doesn’t belong.

For Green (who’s been in no shortage of various bands and collaborative projects), working with collaborative partners who gel right off the bat is arguably more important than simply being able to play in a band with friends.

“Finding like-minded people who work so well together is just really rare,” Green says. “I’ve tried to collaborate with people — and I’ve had some good experiences — but it’s tough enough finding one person that you vibe with so much that you make something magical together. So the fact that it’s five of us and we just happened to be in this whirlwind where it was like ‘Oh my God, that’s so sick! Holy shit!’ That’s just how it’s been going since the beginning. I can compare it to when you start dating somebody, and you just start falling in love with everything they do in the beginning. Everything that happens is just this serendipitous fucking magical thing that’s just there to bond you to them.”

Every member of L.S. Dunes contributes their unique world-class abilities to the melting pot of the band, all pushing each other to new heights in the process. As fans saw at Riot Fest and the world can soon hear on Past Lives, the five members make for a musical act as tight as their friendship. But no matter how superb the group may be, none of them will ever be comfortable with calling L.S. Dunes a “supergroup.”

“The word ‘supergroup’ gets thrown around a lot, but we don’t look at it like that,” Rule says. “It’s a real rock band, and it just so happens that we’re all friends from different bands. We weren’t trying to take people from the biggest bands…”

At this point, Green quickly interrupts with a smile. “People like Frank.”