How to Stream the Taylor Hawkins Tribute Concert Online for Free

Here are the best ways you can watch the Taylor Hawkins tribute concert online for free:

The streaming platform Paramount+ will be broadcasting the Taylor Hawkins concert live. You don’t need a cable subscription to be able to watch online for free. Simply download the Paramount+ app on your device and select either the Essential or Premium plan — both come with a one-week free trial that includes 24/7 live news with CBS.

Hulu + Live TV lets you stream on-demand events including the Taylor Hawkins Tribute concert, which will also air on CBS, Pluto TV, MTV and MTV brand YouTube channels. You can sign up for the Hulu + Live TV package on its own, or bundle it with Disney+ and ESPN+ for an annual rate of $69.99 (ad-supported) or $75.99 (ad-free). With Live TV, you can even record up to 50 hours of content.

Hulu has multiple free trials for all of its packages, and that includes its ad-supported subscription for $6.99 per month. With the base plan, you can stream Hulu free for 30 days until your subscription payment starts. To get the free trial, you’ll need to sign up for the subscription upfront with your email and login information, and Hulu won’t charge you the $7 monthly subscription fee until your trial ends. The Hulu free trial is available online for all new subscribers — no promo code needed.

Sling TV is a low-cost streaming platform with lots of customization. There are three different tiers, Orange, Blue, and Orange + Blue. For tuning in to the Taylor Hawkins’ tribute concert, we recommend the Blue Tier ($35 per month) which you can get for half off the first month if it’s your first time signing up. Sling TV’s Premium Tier, Blue + Orange, is $50 per month, but only $25 for the first month. 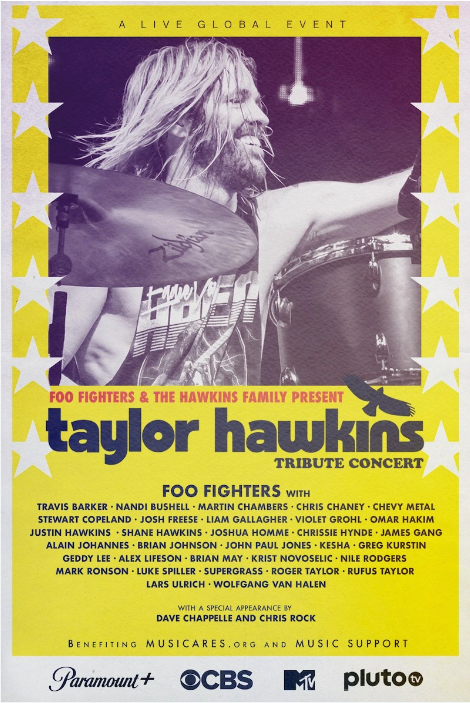