Odd Jobs: Hollywood Undead’s Always Been Cannabis Entrepreneurs — But Now They Do It Legally

George Ragan and Jorel Decker of Hollywood Undead are far from the first musicians to credit cannabis with helping their songwriting. But while countless rockers since the Beatles have used marijuana creatively and recreationally, few are as connected to the business side of the plant as the artists known as Johnny 3 Tears and J-Dog.

Having technically launched their cannabis-growing careers more than a decade ago Ragan and Decker have seen their business grow alongside the industry. From illegal house grows to a premium (and legal) cannabis brand called Dove and Grenade, the duo have spent nearly as much time in the greenhouse as they have on the stage over the years.

SPIN spoke with Ragan via Zoom about his dual careers, the growing industry, and where Hollywood Undead and Dove and Grenade intersect. 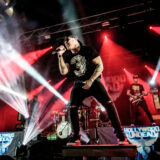 5 Albums I Can’t Live Without: Johnny 3 Tears of Hollywood Undead

SPIN: How did you get started in cannabis alongside the band?
George Ragan: Oh, I’ve been doing cannabis as long as we’ve been doing music. We actually funded Hollywood Undead trapping in LA — before it was legal, obviously. We started growing in 2010 in a few garages in North Hollywood and Sylmar. That’s how we would pay for our music, because we didn’t make any money doing music, and it costs money to do music. This was back when pounds went for like triple or four times what they go for now, but also you could get 5-10 years in jail for doing it. The risk-reward factor was higher, but it’s how we funded the initial stages of Hollywood Undead. So when we got signed and started putting out music, we kept going. As markets started to go legal, we started growing in Baldwin Park. But I didn’t want to live with that over my head, so now we have a facility in Oklahoma and we’re going to spread to different states. [Decker] is actually a very, very good grower. We have a few other growers who aren’t as good, but we’ve all been doing it for a long time. I hate when celebrities jump in to make money when they have no fucking clue about the culture or what they’re doing. It’s just a money play for them, but for us, this was our life for a long time.

Considering how much the cannabis industry has grown since 2010, did you ever think back then that it was going to get to this point?
it’s going to get much, much bigger. This is just the beginning. There are positives and negatives to it, because now it’s a normal business, so you’re dealing with banks and the whole bad side of it. Like any small business, when things get legalized, you’re dealing with corporate interests and people with a lot more money than you. You’re basically the small dude trying to compete with people with tons and tons and tons of money, and that can make it difficult. We’re really still in the beginning stages. Once it’s federally legalized, you’re gonna see Coca-Cola and other huge companies getting into this. They’ll be selling packs of joints at 7-11 eventually. We’re really still in the wild west phase. It’s not as crazy as it was a decade ago, but it’s still half-legal and half-illegal. People still get killed over this, and people still go to jail for a long time over this. Eventually, that’ll be phased out and it’ll be streamlined, which is a negative for many smaller growers in a lot of senses. It’ll be like Blockbuster Video. They came in, lowered the prices, shut down all the mom-and-pop places, raised their prices up, and were the only ones left.

From a cultural standpoint, cannabis is obviously very connected to music. But as industries, are there many similarities between the two?
The culture of cannabis has been very, very intertwined for a very long time with music. Even if it was just as a creative vessel, it’s been there forever. We’ve been using it to write songs and get out of our dome for 20 years. But much like in music, when people found out they can exploit artists and make money, you got a bunch of lawyers and executives who’ve never written a song in their life screwing over the artists — and I think you’ll see a lot of that happen in the cannabis industry as well. There are parallels in that sense that wherever there’s money to be made, you can always count on the sharks swimming — and they’re circling now — but it’s going to be a long process until the dust settles and people know how it’s going to work. For a lot of growers and people who work in cannabis, this is their life and an art form in itself. Unfortunately, all these dudes who’ve been to jail over the past 40 years for marijuana offenses are rotting for what some banker is going to get rich off of in the next 10 years. It’s a sad state of affairs.

Skill-wise, is there anything you learned from Hollywood Undead that’s helped you with Dove and Grenade or vice versa?
I think just patience and that nothing’s ever static. You’re going up, you’re going down. Things are going well, things are going terrible. Being in a band is probably the most insecure occupation you can think of. It’s always “Is this next record gonna do well?” the same as “Is this next harvest going to do well?” We live harvest to harvest, and sometimes we have really bad harvests where we just get bad genetics, and sometimes we have a really good harvest. When something goes wrong, it just requires a lot of patience to ride out those storms. A lot of people who quit music or quit the cannabis industry struggle with that. It’s tough to see through all of the bullshit while you’re going through it. So in that sense, they’re quite similar. You have to take your lumps — and once you’re successful, that certainly does not mean you’re done taking those lumps.

Is there anything you’d want to tell people who are looking to follow your footsteps into either or both industries?
I’ve been telling people this in regards to music for a very long time, and I’d say the same thing for cannabis: “Don’t do it if you don’t love it.” The odds are stacked against you being the next Mötley Crüe or Imagine Dragons or pop sensation. I’m not saying that can’t happen, but you need to have the correct intention when you’re doing it. You have to love writing music in spite of the reward, and I would say the same thing in the cannabis industry. “Don’t think you’re going to set up a grow and make a million dollars.” Something like 90% of grows fail altogether. Do it because you love it, not because you think it’s some get rich quick scheme. In both the world of music and weed, you can burn out very quickly — no pun intended — if you’re not steadfast in your convictions as to why you’re doing it.

Seeing as Hollywood Undead has been a pretty full-time band for more than a decade, how do you balance your career in the band and the cannabis industry?
I mean, you just have a full schedule. I would say the more difficult part is managing having a family, having a band and having that all at once. This stuff was a hell of a lot easier when I was 25. But I love all three of them, and I devote as much time as I can to all of them. Family always comes first, and then I devote what I can to the other two. I think if you’re driven to succeed at anything, you won’t make excuses and you’ll do what you have to do. I think most people say they don’t have time because they prefer wasting their time. I know tons of dudes who say they don’t have time to do something, but they’ve watched every episode of fucking Game of Thrones 30 times. You pick and choose how you spend your time, and there’s nothing wrong with how you want to spend it, but if you want to have success in industries where there’s 30 people trying to get every single job, you have to outwork those other 29.

I also have a good team. [Decker] is my partner, and the other guys in the band help with the branding. I think one of the reasons we made it this far in music — not that we’re some massive band — is because we’re democratic and everybody’s opinion counts, so we kept that in mind for cannabis as well. There’s no tyrannical overseer, and we’re not letting outsiders in. At the end of the day, I think with music and cannabis, people respect our philosophy and that we’ve gotten our hands dirty for a long time. I just devote myself to the things that I like to do wholly and fully — and I think if you’re willing to do that you can succeed in anything.