There’s no shortage of sci-fi video games on the market, but most of them attempt to move things into the distant future. For Rollerdrome, that sci-fi is based on movies of the 1970s and set in the impossibly far-off year of 2030.

The OlliOlli creators at Roll7 teamed up with Paul Rabbitte to bring his original vision to life, and it’s a combination of rollerskates, guns and dystopia that most wouldn’t dream of. Rollerdrome is a retro-futuristic action-packed third-person shooter that blends an elaborate traversal and tricking system (performing tricks refills the player’s ammunition) with fast-paced combat, and it’s as fun to play as it is stylish.

Whether you’re looking for retro sci-fi settings or seamless blends of skating and gunning down bad guys, Rollerdrome is likely the only game to fill that niche this year. With the unique title (scored by composer Electric Dragon) now available on PC and PlayStation consoles, SPIN spoke with Rabbitte about turning his one-of-a-kind vision into a reality. 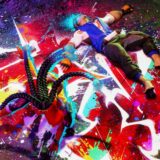 SPIN: Where did the idea for the aesthetic of Rollerdrome come from?
Paul Rabbitte: The game is basically very, very inspired by old ‘70s sci-fi movies, which all have this kind of dark vibe to them. They’re usually kind of high-concept, but they take themselves very seriously. I wanted to make it feel like an old ‘70s sci-fi film and do everything through the lens of an old ‘70s sci-fi film. Rollerball is probably the most obvious influence, since it’s a futuristic bloodsport on roller skates. We’re pulling elements from that, but also like films like THX 1138 and Westworld, which have all of this old tech in a retro future vibe. I don’t feel it’s too common in games to explore that ‘70s style, and I thought it was a really good fit for this game. The gameplay itself is a bit high-concept as a genre hybrid, which fits into that style of a ‘70s sci-fi film.

Speaking of that genre hybrid, what made you decide to mix skate tricks and third-person shooting for the core gameplay? Was it due to Roll7’s history with skateboarding games and shooters?
It’s really like a mix of all of Roll7’s games put together, because you have the skating of OlliOlli, the shooting of NOT A HERO and the futuristic bloodsport of Laser League. You mix all of these elements together in a way, and you get Rollerdrome. I had initially made prototypes of this game on my own, and then I joined forces with Roll7 to make it a reality. I wanted to pull together the movement of Tony Hawk and the shooting of Doom. The experience Roll7 had was incredibly helpful, and we were all aiming for the same thing. We all wanted this “flow state” game with really tight, punchy controls and a really good feel to it. I think that’s in a lot of Roll7’s games, and it’s the same in Rollerdrome.

You mentioned Doom, but as much shooting as the game has, it never really feels like the violence is the focus.
Well, we really didn’t want to focus on the violence in the game. Yes, it’s a shooter and this future bloodsport, but we didn’t want to dwell on the violence. We wanted to make sure the game was really punchy and felt really good to play without dwelling on any pain or violence or stuff like that. I think it’s the same if you go back to the ‘70s films. They didn’t dwell on gore or violence too much. I think the fact that you’re constantly moving while you’re shooting helps. You’re zipping by these guys, as you’re shooting them, so it pulls back from it being a very violent style and becomes more about the movement. When you’re playing the game, you’re finding your path through all the attacks and constantly moving to come back around to shoot the enemies, so you’re never really stopping to dwell and look at the violence.

Rollerdrome is a very easy game to pick up and play, yet there’s a massive amount of depth in the movement, shooting and tricking mechanics. Was that something intentional, or did it just keep building until you ended up with this ornate system?
It’s something we wanted from the start, which is why each of our levels is a little sandbox. We want players to explore these sandboxes to find their own way around them and see all of the secret nooks and crannies around each of the levels that can improve their score. We want them to get a perfect combo across the whole level, which I think comes from skate games. A lot of skate games — like Tony Hawk — are about freedom. You’re dropped in a level, and you can go around doing whatever you want. It’s really fun, it’s really appealing, and it’s definitely something we wanted to carry into Rollerdrome as well. We’ve got these enemies around — some with flamethrowers, some with laser sights — putting pressure on you to move in different ways, and it’s up to you to change your plan and use the environment as best you can. You may have a plan, but when things go wrong, you can turn around and you do something else. There’s a lot of freedom with that, so every time you play, it should feel different. You can play again and again to get better, use different plans and just really master the levels.

Considering that the game is set in the distant future of 2030, how does it feel to know that people are very likely still going to be playing Rollerdrome when it’s then set in the present or the past?
I just think it’s really funny when you’re watching these old movies and they’re actually trying to set themselves in the future, but they’re already in the past. Escape from New York takes place in 1997, and I always think that’s really funny and kind of charming. It was something we wanted to do here, and it will be quite funny to me in 2030 if people are still playing it.