Pussy Riot has come with a full agenda to Los Angeles’ El Rey Theater, ready to bounce and rage to a soundtrack of sultry pop hooks and noisy, glitchy electronics. And yet nothing onstage is more essential to the night’s purpose than the confrontational words and graphics flashing on the big screen behind them. “Vasectomy prevents abortion.” “My body does not need advice from a priest.” “Matriarchy Now.” “Slut.”

“I hate when you talk, I hate when you look at me/I want to hatefuck you,” leader Nadya Tolokonnikova sings in a taunting, breathless voice on the song “Hatefuck,” a pair of women in knitted Balaclava masks dancing beside her. The song is the most hard-hitting of the seven tracks on Pussy Riot’s debut mixtape, Matriarchy Now, a collection executive produced by the Swedish art-pop diva Tove Lo, with guest vocals by Slayyyter, Big Freedia and ILOVEMAKONNEN.

In several one-off performances this summer, including the El Rey set on Aug. 10, Tolokonnikova has stood tall in fishnets and pink boots for euphoric young fans in Balaclavas and pussy hats, seeing them less as pop music fanatics than as potential comrades. Near the beginning of her L.A. show, she leapt right onto the dancefloor to tap into their energy, and celebrate the gathering as equals.

“It’s important for me because we are not really a music band,” Tolokonnikova says after the El Rey show, describing Pussy Riot instead as a feminist art collective. “We treat people who come to our shows as part of our movement.” 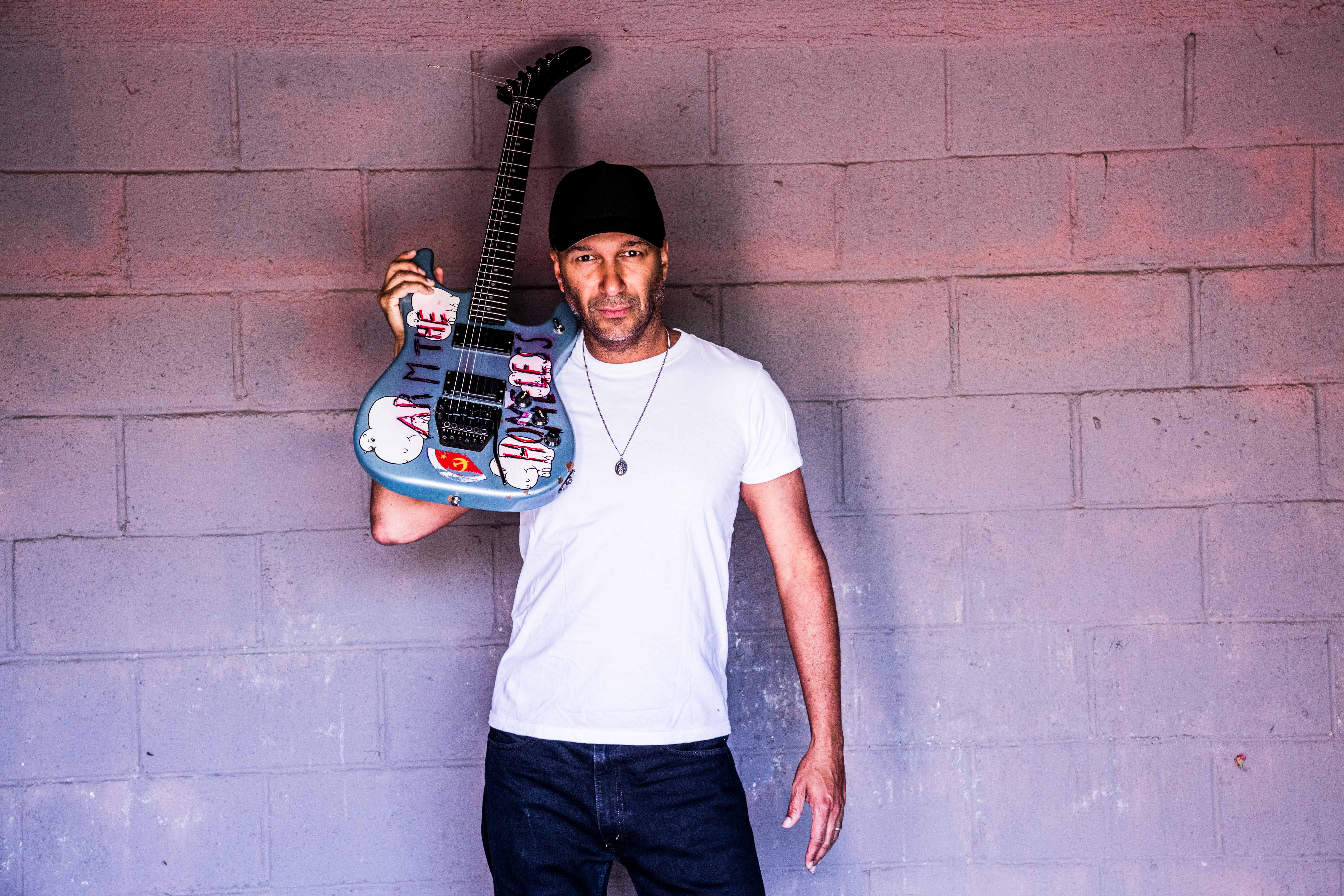 The message is the point, a lesson learned from the example of conceptual artists like Marina Abramović. But so is the gathering of the community at these live performances, which, this year, have included stops at South by Southwest and Outside Lands, as well as another set planned for New York City in September.

“Obviously, what I’m doing is not religious, but it kind of serves the same purpose as prayer,” Tolokonnikova says of the events. “We imagine this better world in our songs and our art pieces and fight against the bad actors, the bad guys.”

It’s been over a decade since the original Pussy Riot came together in Russia, using music, art and guerrilla performance to promote feminist ideals and protest the oppressive Vladimir Putin regime. In 2012, their most daring action was invading the opulent Moscow cathedral of the Russian Orthodox Church to perform their ecstatic aggro “Punk Prayer,” their faces hidden beneath colorful Balaclavas. The song’s lyrics called on the religious saints to embrace feminism and to drive the Russian dictator away from their lives.

The group’s members were arrested and put on trial for “felony hooliganism” and “religious hatred,” which only amplified their small local movement to international fame and outrage. The Pussy Riot activists were put on Amnesty International’s Prisoners of Conscience list, and drew outspoken support from Paul McCartney, Sinead O’Connor and the Red Hot Chili Peppers. Yoko Ono awarded the group a LennonOno Grant for Peace for “standing firmly in their belief for freedom of expression and making all women of the world proud to be women.”

The legal drama arguably gave the young women more power in Russia and abroad than they ever could have imagined. At the trial, Tolokonnikova and close friend Masha Alyokhina were sentenced to two years in a Russian penal colony, where they continued to protest poor living conditions and slave labor.

After their release in December 2013, the duo traveled to the U.S. and were embraced as heroes by many in the political and cultural beau monde, from Hillary Clinton to Madonna to pre-NFT Shepard Fairey. As Pussy Riot grew from its original dozen members, it also splintered into various chapters. Tolokonnikova remains the most prominent figure, settling within various underground music and art scenes across America while others remain active in Russia — although Alyokhina had to flee that country in May after multiple arrests and a new threat of prison.

The impulse to speak out on oppression remains. Near the end of her hour-long set, Tolokonnikova put on a black T-shirt reading “Free Brittney” in support of American basketball star Brittney Griner, now imprisoned in Russia. Days earlier, Griner was sentenced to nine years for possession of less than a gram of cannabis oil.
“I know how terrible it is,” she says later of being in a prison there. “It’s not a place for anyone, especially if you don’t speak Russian. There are no translators, so there’s no way she can learn about her rights.”

The case has Tolokonnikova “enraged” and is part of a larger cause for legalizing marijuana in the country. “Weed has to be legal. I’ve been fighting against the Russian war on drugs for years. I’ve seen so many people being locked up.”

Tolokonnikova’s history as a political prisoner in Russia transformed her into an inspirational figure around the world, but the reality left some scars.

“I try to minimize my travels because I am diagnosed with major depressive disorder ever since I got out of jail, and it never goes away,” she explains quietly. “I’m on medication. So it helps me to stay afloat, but travels make things worse for me personally.”

It’s the reason her Pussy Riot performances are few, rather than embark on a full tour traveling from city to city.

“I’d rather focus on individual performances and give myself fully to people who came to see me,” she adds. “Otherwise, I’ll be burned out, and I don’t want to bring myself to our supporters in such a bad state of mind.”

She also points out that music amounts to less than half of her activity, though writing, recording and rehearsing for shows is demanding. She has fully embraced NFT’s and the web3 art movement as a creator and promoter by helping establish UnicornDAO, which buys art made by artists who identify as female, non-binary or LGBTQ+.

“The rest of it is just a lot of crypto activity, a lot of activism, a lot of fundraisers,” she says. “We raised $7 million for Ukraine this year, half a million dollars for reproductive justice.” She’s drawn to NFTs and crypto currency not from a deep interest in finance, but from the possibilities afforded by the coming together of technology, culture and free expression.

As the song that introduced Pussy Riot to the larger world, “Punk Prayer” was the most intense, unpolished form of agit-punk, with gut-punch lyrics and a shrieking melody. They performed a similarly raw follow-up, “Putin Will Teach Us to Love the Motherland,” in protest outside of the 2014 Winter Olympics in Sochi, where Alyokhina, Tolokonnikova and others were beaten by Cossacks.

In the U.S., Tolokonnikova quickly branched out from basic punk rock to layered electronic dance and pop, releasing a series of provocative singles and music videos, and her new mixtape represents the work of several creators behind her vocals. She expects to have another collection out later this year or early next with a “darker, more industrial sound,” featuring collaborators like Chris Greatti (Poppy, Youngblood) and Alex Ridha of Boys Noize.

“I don’t really identify as a musician,” she explains. “I come to the studio and I work with different artists or different musicians, and they all have their own distinct sounds. What’s important to me is making music that can motivate people, inspire them and carry a message that’s important to me. That’s why my music is all over the place.”

Onstage and off, in music or visual art, Tolokonnikova’s work has challenged gender roles and stereotypes, and pushed boundaries without apology. In 2008, a very pregnant Tolokonnikova and her then-husband were among five couples having public sex as a performance art protest against the government at Moscow’s State Biological Museum.
More recently, she’s put her physical self out into the digital realm, last year creating an OnlyFans account where she poses clothed and naked for a paid membership.

“I’m a sex positive feminist,” she says now. “A lot of my work comes from that. I believe that women can do with their bodies whatever they want and if they want to expose their bodies naked, they should be free to do so.”

Creating content for her OnlyFans account, interacting with paying members and challenging their ideas of intimacy, “actually helps me to get more in touch with my own sexuality.”

As a prominent critic of Putin, Tolokonnikova doesn’t speak publicly about where she lives for safety reasons. But she’s clearly found a comfort zone in the U.S. and is now essentially fluent in English. “I’ve been writing lots of songs and when you rhyme, you learn a lot of words.”

She personally felt the blow to American feminism from the fall of Roe v. Wade at the U.S. Supreme Court in June, and notes that reproductive rights in Russia are currently more secure than in some American states. Access to abortion there goes back a century.

“I’m not a big fan of the Soviet Union, but what we did achieve is equality of men and women,” she says before mentioning that things have gone backward in regards to domestic violence. “In 2017, our parliament passed a law that pretty much allows men to beat up their wives. It’s just something punishable by a fine.”

Russia is an increasingly dangerous place for activists and anyone who dares to criticize the Putin regime or the devastating war against Ukraine. Tolokonnikova says people are being arrested for tweets, likes, reposts or anything that hints at calling the conflict a “war.” To remain active politically, many have fled to neighboring countries.

When Tolokonnikova was still largely based in Russia, frequent trips to Ukraine were a source of escape and inspiration.

“Ukrainians have been active and really fierce since their revolution in 2004,” she says wistfully. “It’s incredibly sad because Putin literally destroys everything we love.”