The Best, the Mess and the Rest: Lollapalooza 2022

It’s been 17 years since the current version of Lollapalooza made its home in Chicago’s Grant Park. Though there are lovers and haters of the festival for a variety of reasons, the 2022 version went off mostly without any issues and definitely without the cloud that hung over it last year. On a bright note, it didn’t feel as jam-packed as years past — there was ample room to navigate through the crowd to the different stages — even if nothing at this year’s Lollapalooza changed.

Here’s everything that we saw this weekend, which, unlike other fests this year, was actually quite great with few gripes.

The weather: In a very unscientific poll conducted on the grounds, all 11 people agreed that the weather at this year’s fest was the best in its history. Warm but not hot, humid but not sticky, clouds but no rain, the situation was as idyllic as Chicago gets in the summer. This unseasonably delightful weather made things just that much better.

Metallica: Metallica brought the thunder. Judging by the crowd and too many Metallica shirts to count, it was the most anticipated set (except for maybe J-Hope), even as a Thursday night headliner. And that didn’t include any new Stranger Things fans, though there were some younger attendees taking in the action (and one special guest). Stampeding through their catalog in a 16-song set, there were plenty of highlights, but James Hetfield asking the crowd to give the much-maligned St. Anger a second chance was up there. 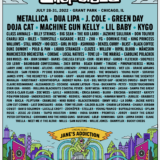 Green Day’s Metro aftershow: What separates Lollapalooza from other major festivals are the aftershows: intimate performances by Lolla acts at small venues. But Green Day at the Metro? It doesn’t get better. The band blitzed through a 25-song set, including a number of songs that hadn’t been played for as long as 21 years. The sweaty, packed crowd was as energetic as the band, with the GA section moving and waves with pits breaking out many, many times throughout the night.

The side stages: This year’s smaller stages did the near-impossible: They made a festival performance in the middle of a park seem cozy. Watching Hinds play on the Bud Light Seltzer Sessions (yes, that was the actual name of the stage), Jesse Jo Stark and Meet Me @ the Altar on the BMI stage, Pom Pom Squad on the Discord stage, Sampa the Great on Coinbase and Denzel Curry’s raucous headlining slot on Perry’s stage showed folks they’re not to be missed.

Turnstile: What’s left to say about them that hasn’t been said already? They were our 2021 artist of the year and already dazzled us by winning over the notoriously fickle Coachella crowd nearly four months ago. At Lolla, they had the prime slot on the Discord stage, which was packed. As usual, they brought it (even as a four-piece now), showing that the hype from last year was not only deserved but justified. Believe it, and we’re not alone in thinking this.

I know this sounds like a joke, but it is not. I met Dua Lipa in the crowd at Turnstile

Dua Lipa: As if anyone needs any further notice, but she’s a superstar. Dua Lipa had one of the largest crowds for her first performance in the U.S. since March. A lot has changed on this soil since then, and the pop star wasn’t afraid to speak out about topics such as Roe v. Wade, racial injustice, and the LGBTQ community. Blasting through her biggest hits, she proved that even though she was the headliner at one of the country’s major festivals, bigger things are still to come.

Lil Durk being struck by pyrotechnic in his face: Somehow, Lil Durk managed to power through his set after he was struck in the face by a pyrotechnic onstage. It was a bit harrowing, and after the set, the Chicago rapper wrote that he’s going to “take a break & focus on my health.”

The crowd for IDLES: The British post-punk group had a prime 6:45 pm slot on one of the main stages, which should have meant…something? Instead, the area was barren (and it wasn’t like they were going up against a murderer’s row of competition), with loads of empty space. Though they are divisive (you love ’em or hate ’em, no in between), somehow curious onlookers never swung through. Unfortunately, it seems like the band would have been better served playing on a different stage at a more ideal time in order to convert the unconverted.

The CEO of Goldman Sacks performed a DJ set: Not much to add here, except that it’s nice to have friends in influential places.

The food: As usual, the food was between 15-30% overpriced. For a festival that isn’t at a loss for branding (every stage has a corporate sponsor), it shouldn’t squeeze the vendors, who in turn squeeze the paying customer. We still haven’t learned anything from Woodstock 99, have we?

The festival isn’t going anywhere: As Perry Farrell told us, Lollapalooza is staying in Chicago for another 10 years. Whether the pomp and circumstance of bringing Mayor Lori Lightfoot to make the announcement was needed is questionable. The same goes for the ongoing dispute between locals and the city about the festival’s favored nation status. But, revelers won’t care: the fest is going nowhere and they can start making their summer plans for the next decade now.

Reunions: Farrell’s other band got back together early this year and this was only their fifth appearance in the past two-plus decades. Here’s a nickel’s worth of free advice: why not embrace the band reunion? Coachella was widely known for this as recently as 2016 when Guns N’ Roses shocked fans when Duff McKagan and Slash rejoined Axl Rose. It could be a neat element to add to the fest, and that could be the throughline to the festival’s past. That may not be the festival landscape in 2022, but outside of Riot Fest, no one else is doing it. Just a thought!