“I love New York,” Julia Michaels tells me, only a few minutes into our interview, from her Los Angeles home. Straight off, the singer and songwriter, who will turn 29 this year, is a lesson in dichotomies. She loves New York because it “feels communal,” in stark contrast to the place that Dorothy Parker once deemed “72 suburbs in search of a city,” a sentiment Michaels seems to echo. “LA is so spread out and nobody really walks here and it doesn’t…it doesn’t have the same liveliness, I think,” she says. In pursuit of an acting career, her father moved the family to California from Iowa when Michaels was a child, changing his last name professionally from Cavazos to Michaels in the process, a tradition she carried on. “I don’t think it’s the environment that makes humans, humans,” she wisely tells me, and of course she’s right.

We chat about her love for poetry as a child and how, according to her aunt, she’d started writing songs then, too. By 13 or 14, she began learning piano by ear, putting her poems to music. “That’s really essentially how it started,” she says. “I just always loved poetry. I always loved the idea of rhyming words together and finding odd rhymes to words. I would always have a notebook when I was a kid. I would write the alphabet at the top so I could try and find as many rhymes for words as possible.”

Of all the things discussed, her specialness seems to interest her the least. “I still play [piano] as shitty as I did then,” she laughs. It’s an unavoidable topic, though. While talent may thrive in so many young songwriters, the ability to create megahits remains rare. A small taste of Michaels’ songwriting timeline is a display of powerhouse partnerships: Demi Lovato’s “Fire Starter” (2013, co-written with Lindy Robbins), Kelly Clarkson’s “War Paint” (2015, co-written with Joleen Belle and Sir Nolan), Dua Lipa’s “Pretty Please” (2021, co-written with Dua Lipa, Caroline Ailin and Ian Kirkpatrick), and Selena Gomez’s “Lose You to Love Me” (2019, co-written with Gomez, Justin Tranter, Mattias Larsson and Robin Fredriksson), one of several collabs between the two women, this becoming the first to hit No. 1 on Billboard’s Hot 100 for Gomez. You’ve also heard Michael’s work performed by Justin Beiber (2015’s “Sorry”), Britney Spears (2016’s “Slumber Party”), and Gwen Stefani, to name a few, with Michaels co-writing the majority of the songs on Stefani’s 2016 studio album This Is What the Truth Feels Like. 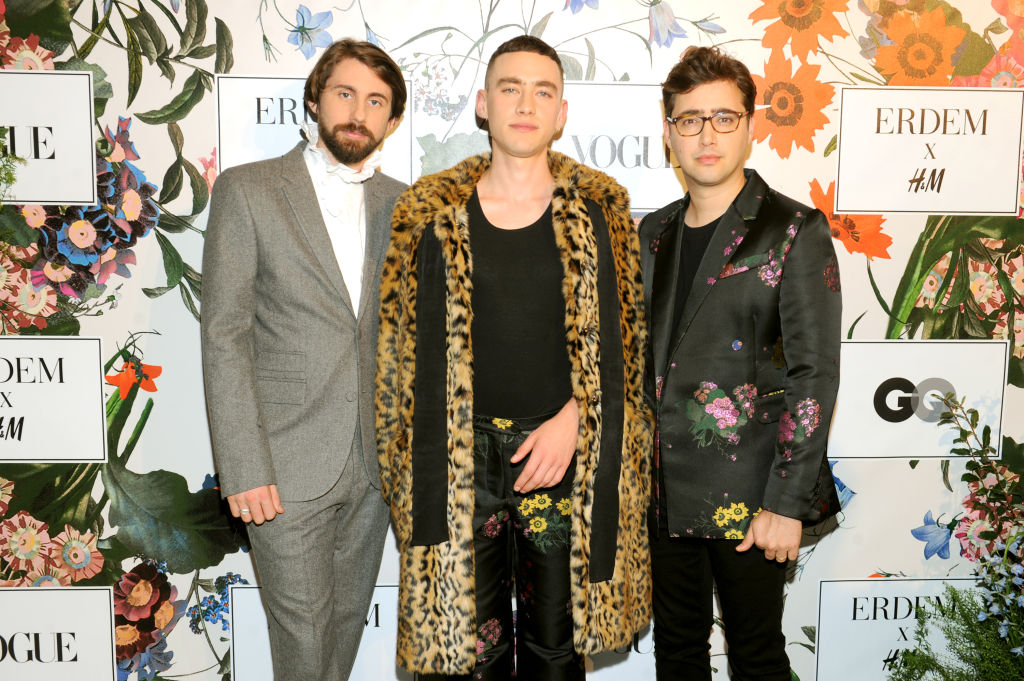 “I wouldn’t say that I have one process but I find that for the most part, I’m a pretty internal writer,” she explains. “I write everything in my head and I don’t really write anything down and then I’ll just loop chords. I’ll have someone play chords and I’ll just have them loop for like two hours. The same thing over and over and over and over again until I write a full song and then I put it down and then I finesse it from there.I’m like, ‘This part sounds better and sounded better in my head than it did out loud,’ and then try to rearrange things from there. But if I’m writing with other people, like for other artists, it’s a different thing. The process is really just talking to somebody until we feel like we have something that feels relatable enough to talk about in a song.”

“It’s a bit like coconut water,” she continues. “It’s like…you don’t know if you’re actually going to like it but then the more you drink it the more it grows on you.”

Judging from the insane response to a song like 2017’s “Issues” (co-written with Justin Tranter, off her Nervous System EP), her audience also loves the taste of coconut water, or whatever heart-rendering, brutally honest melodic beverage Michaels is serving up. The fact that it’s certified Platinum (Diamond in France, actually) feels almost accidental to her. “I’ve never been able to call a hit, so I don’t even know what that looks like,” she says. “Some people have the ear for it. Some people can be in the studio and be like, ‘This is a hit,’ and I’m like…really? My goal has always been to just make music that feels good and resonates and connects and relates and that’s all I’ve ever wanted to write.”

“Issues,” she says, is an example of a song that surprised her. “We put that song out in 2017 and then it was everywhere,” she recalls. “I don’t know if I was mentally prepared for that at the time. 2017 was a bit of a whirlwind. I found that most of 2017 I was just trying to catch my breath…” She had the same experience with 2019’s “If the World Was Ending,” a song co-written with JP Saxe at a piano. “Didn’t think much of it and then came the pandemic, people were connecting to it so much and that was something I never anticipated,” she states.

Such success comes with its own pressures and challenges. “I feel a lot of pressure because I get a lot of people that are like, ‘I’m your biggest fan. I make music because of you.’ Then I’m like, okay, I can’t just do what I’ve done. I need to figure out how I can push myself and how I can keep moving myself forward, but still be me.”

“What keeps you grounded? What makes you feel like yourself?” I ask her.

“My self-hatred. My self-deprecation.”

“Oh, yes. I humble myself daily,” she says, with a slight chuckle.

Such are the trappings of overachievers and that infuriating, unshakable adage that sometimes those with lesser talent embody the most confidence. Ironically, it’s music, she says, that makes her feel her most grounded, her turn-to to rediscover her true self.

“You just keep going then?”

“Yes.” She admits that she doesn’t take compliments well. Success is a concept she struggles with. “I would say it’s more about challenging myself. I’m not trying to compete with anybody or anything. If anything, I’m trying to compete with myself. When I started being an artist I didn’t really have goals. I didn’t have anything to set out for. I was just an anxious 24-year-old girl with a song that I loved. That was really it.

“If you would’ve told me then that I would have 3,000 people, 3,500 people come to a show and scream every fucking word with me from inner monologue, I would’ve been like, ‘You’re lying. That’s not going to happen.’That for me is huge. Knowing that I have people all over the world that want to come to my shows and take the time out of their day to come be with me and sing these songs and scream these songs and cry with me and laugh with me. That’s success for me right there.”

New music is coming—hopefully—soon. “I’m in my petty-pop era,” she reveals, of what’s to come. “I’m writing a lot about, I guess different phases of love. I don’t know. Just trying to find, like I said, just new creative ways of doing it and it’s been fun. It’s been a fun experiment and experience with a lot of people that I just truly and genuinely enjoy working with.”

For now, her goals include continuing to grow—and also playing Red Rocks one day. She tries to stay focused on the present. “I’m making music I love, with people that I love, and hopefully I get to tour these songs soon and I get to see everybody again and we get to fucking go ape-shit again together.”

She finds happiness in simple pleasures. “I like to drive. I like listening to music in the car. I am really grateful for days when it’s super sunny. I love to draw. Food. I love food. I will eat and then plan my next meal. I literally adore food. My family and friends. I like to bake all kinds of things. My favorite thing is pie though.I make a pretty kick-ass Apple Pie. That I can confidently say I can do well.”

She may not have as much confidence in her place contributing to the landscape of a newer crop of female pop artists approaching songwriting with searing honesty, but she should. According to Michaels, she’s only following in the footsteps of those before her. “Lauren Hill and Fiona Apple, and Regina Specter, Cheryl Crow, Ani DiFranco, Patty Griffin: These were all women that were so unapologetically themselves, and I think were ahead of their time. I’m just following in the steps of my foremothers. The way that they impacted music in the ’90s is just that, that was sort of what I wanted to do. When I started writing songs, it was the Katy Perrys and the Keshas and the Lady Gagas. It was amazing. It was amazing pop songs, but I wanted something that just felt honest. I’ve always tried to just write songs in their most authentic, honest, truest form.

“That’s just what happened with “Issues” — I just happened to write a song that resonated with a lot of people, because it was so different from the landscape of pop of that time. I think that’s why. I don’t think I was the only one. There were definitely a lot of female artists trying to do the same thing. I just happened to be in the right place at the right time with the right song to do it.”

“Issues” has just surpassed a billion streams. “I look back on that and I’m like, ‘Wow, that truly was a special time in my life.’ I’m so grateful for everything that I’ve gotten to do. I literally get to fucking make music for a living. I go to a studio, I kick off my shoes, I wear pajamas and I write a song. That’s my job. I don’t take any of that for granted.”

So then, after all this, what advice would Michaels give to someone on how to write a great song? Her answer, is to cut out all the “bullshit” and stay away from trends. “I think for me, the best piece of advice I could give is just like, and it’s just so clichéand so fucking cheesy, but be yourself. Write what you want to write regardless of what is popular or trending or what’s popping off on TikTok. Just be you and write what you would want to hear on a streaming platform.

“I think also, when you’re assigned to a label, there’s so many outside forces telling you how to dress and what to say and what kind of beat you should do and what kind of producer you should work with and what it should sound like. It starts to dilute who you are in your artistry and then you start to forget why you did this in the first place. I’ve seen that happen to a lot of people. I think just sticking to you and just doing you regardless.

“You won’t always have your career, too. You need to figure out what your self-worth is aside from it anyway.”