5 Motorcycles I Can’t Live Without: Daniel Ash of Bauhaus/Love and Rockets/Tones On Tail

Home » Lists » 5 Albums I Can't Live Without » 5 Motorcycles I Can’t Live Without: Daniel Ash of Bauhaus/Love and Rockets/Tones On Tail

This was meant to be a 5 Albums I Can’t Live Without column, but Daniel had another idea…

‘See the thing is, what I was thinking would be much more fun for me, and I could really get my teeth into, would be the five motorcycles I couldn’t live without.’

Best known for I suppose I’m known for using an EBow with a guitar or what’s called a sustainer. I use that extensively. I use it a lot in all the bands, just where it sustains their note. 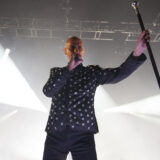 Really want to be in  I’ve got a quote from Steve McQueen, I try to relate to 100%: “I would rather wake up in the middle of nowhere than in any city on earth.” That’s an actual quote from him and I completely agree. Not into big cities.

Excited about  Taking my last ride before I head out tomorrow to do some gigs.

I think a lot of guitar players actually love motorcycles. One goes with the other. A lot of people in rock and roll, but usually, it’s the cliché Harley-Davidson thing with rockers, but I’m really into Italian bikes now.

If you think about a bicycle and then times it by a hundred, a bicycle going downhill fast, you get an idea of what a bike is because that’s it, you’re exposed to everything, so everything is amplified. Everything is taken away when you’re in a car. You’re in a cage in comparison. Though, it’s not for everybody, but I can’t live without it and other bikers that I know. I have to ride every week, if not, every day. It’s an addiction, but to me, it’s a healthy addiction. It keeps me out of trouble, for sure.

5 Motorcycles I Can’t Live Without:

I got 162,000 miles on that. There’s one that I don’t think I’ll ever get rid of because I’ve got so many memories and stories connected to that bike.

It has white wheels, it’s very unusual, the color scheme. This bike I got from a guy…he died young. He was on a motorcycle, actually, unfortunately. People know about it because he’s a celebrity of sorts. His name was Prinz Oliver [Oliver Prinz von Anhalt]. He was actually a prince and he was Zsa Zsa Gabor’s stepson.

I bought this bike down in Venice in LA a couple of years ago. It had just a couple of thousand miles on it because he’d only used it on the racetrack. There’s a story behind that one. Prinz Oliver, I still got the certificate.

It’s an incredible bike. It’s a little 800 and it’s like a little spitfire. It’s got an off-road exhaust system and all tuned up for the racetrack, so that’s a real favorite of mine.

The fastest bike I’ve ever owned. That thing is looney fast. Just bonkers.

I suppose technically, I’m a collector, but I ride the hell out of all of them. They look great, I keep them perfect. Mechanically, they’re all 100% because I ride them all a lot.

I actually got a cop bike and it actually says “Police” on it on the air filter. It’s actually a cop bike, so it’s got a real good engine, my main long-distance bike.

The police engines are more peppy. They’re faster and better than the standard bikes. I got it from a retired teacher. I think it was a gym teacher. He had this bike and he was downgrading a bit because he needed money, and so I grabbed this thing off him. It’s got a great engine.

I’ve got a 2005 Triumph Rocket III, which is the largest bike you can buy, as in on the road, legally. It’s 2300cc, which is basically a car engine in a bike. That again is looney fast. It’s the sort of bike that if Judge Dredd was real, that’s what he would ride.