Twenty One Pilots on Playing MTV Unplugged, Their Favorite Episodes and What They’re Doing Differently

MTV Unplugged performances, at least during its 1989-2001 heyday, were among the most watched and influential events in music programming. If you were on Unplugged, you made it. Though its influence has waned as artists have moved away from traditional television as a whole, the show’s legacy remains firmly intact. Now a quarterly event, MTV enlisted Twenty One Pilots as the next artist to perform on MTV Unplugged.

The show is unlike any other Unplugged predecessor. Tyler Joseph and Josh Dun don’t “unplug” in the traditional sense, but they stripped down their songs to create completely different versions than what’s made them radio staples in the past half-decade or so.

A day before they recorded their set in front of an intimate audience at Exchange in downtown Los Angeles, we caught up with the band for a quick chat at a nearby hotel where they broke down all things MTV Unplugged and what new wrinkles folks could expect on their episode.

SPIN: What does playing MTV Unplugged mean to you guys, considering the legacy and the history of the bands who have played it before?
Tyler Joseph: It’s pretty cool to be a part of it. I think that it’s got a long history of showcasing an artist or a band in a new way. On its surface, it feels like you should just be playing on an acoustic guitar. More than anything, this series has turned into being able to see an artist or a band in a different way than they traditionally present themselves. Taking an opportunity like this, to reinvent how we would present ourselves has been challenging, but also, in a sense, reminded us of why we love to play music. Sometimes you can get into this rut of just performing your shows the way that you’ve always performed them. And then when you’re forced to kind of rethink how to present them, you kind of fall in love with them into the songs all over again. 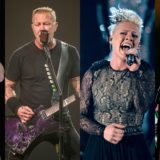 Josh Dun: MTV Unplugged has been such a cool form of discovery. People who talk about Unplugged will often reference a performance that actually got them into the band. It’s a cool way to get inside of an artist’s performance and see it in a different light.

How long does it take to rehearse and get a show like this prepped compared to like a regular performance?
Joseph: About a month and a half. It’s not like we’ve been rehearsing for that time, but mentally prepping. The concept that we’re applying to this is, it’s kind of unplugged, but it’s almost the opposite of unplugged, where we’re plugging in all of our instruments. Traditionally, Josh and I perform to pre-recorded tracks so that we can focus on our performance and connecting with the audience. What we’re going to do for MTV Unplugged is we’re actually going to build out and play each part of the track in real-time, looping and building out that track. By the end of the song, there will be new and different versions of our songs that’s never been heard before. There was a whole roadmap of “How do we pull this off? How do we learn the technology?” But then also, the creative side of what do we want these songs to become and making them sound really unrecognizable at first until we start saying the lyrics. It really took a lot of planning before we even got into rehearsing it. That’s why it took longer than you would think.

What was the first MTV Unplugged episode you watched as a kid?
Joseph: The Nirvana Unplugged. It’s crazy. Alice in Chains was amazing. More recently, I watched the Liam Gallagher one. It’s a long list of awesome artists and bands. And we’re excited to throw our hat into the ring.

[Shows them a video of Liam heckling Noel from the audience]

Joseph: Maybe that’s how we’ll open our set. I’ll start in the balcony.

How did you decide on that one?
Joseph: When the music video was released, it was at a pivotal moment in our career. We were still very much a local band, and seeing that video just rocked us. When that song came out, right around the time where we really put our heads down and decided we’re going to do this thing [the band]. The timing of it has always been a part of our journey, so we thought it was cool to commemorate that.