Odd Jobs is a new series that takes a look behind the curtain of professional musicians’ secondary careers and side hustles.

If Matt Hoopes made his biggest mark on the music industry as the guitarist for pop-punk rockers Relient K, most people would’ve considered it a successful career. Eight studio albums (plus a pair of Christmas albums and one covers project), a song that you couldn’t escape for a chunk of the mid-2000s, and nearly a quarter-century standing next to singer Matt Thiessen’s curly blond hair is more than most accumulate.

But in 2018, Hoopes launched 1981 Inventions, a company based around a single guitar effects pedal that he’d spent years perfecting. The pedal (named the DRV) sold out immediately. It earned rave reviews as a slightly brighter and refined take on the classic ProCo RAT, and its limited supply and sleek aesthetics immediately made it one of the most sought-after effects pedals on the market.

Four years later, Hoopes has caught up with the demand — meaning there’s usually one or two of the limited-edition colorways available while the others are all either sold out or up for preorder. Bands and artists across a variety of genres count on the DRV (Jack O’Shea from Bayside even helps build them), and even after its initial honeymoon hype has tailed off, it remains one of the top-rated and best-selling boutique pedals on the planet.

SPIN spoke with the guitarist and pedal builder about how he shifted into the world of effects, balancing his two musical endeavors, and his collection of Tube Screamers.

SPIN: How did you decide to build your own pedal instead of just putting your name on a “signature” model of an existing one?
Matt Hoopes: Well, that’s what I wanted to do. I made friends with a guy named Jon Ashley in 2013, and he has a company called Bondi Effects that has a pedal called the Sick As Overdrive. It really changed my idea of what a boutique-made pedal could be. The more I used that pedal — which kind of became a signature sound for me at the time — I just became really excited about the whole thing. I was like “Man, let’s do something together — something new — because I really want a pedal that does exactly what I want it to do. I bet you could sell a bunch of them, and I would love to just help you do it.” I didn’t care about getting paid off of it. I just wanted to make this thing happen. Once we started working on it, he said “OK, I’ll finish this, but I don’t want to put this out under my company. It’s not lining up with where I want to go. But you’re welcome to have this product and put it out yourself.”

What’s it been like to see people who never even heard your music or know of Relient K becoming fans of the DRV just as a great distortion pedal?
I think that’s one of the things I love the most about this. I’m definitely thankful for the band and for all of my experiences in the band that helped shape me as a guitar player — and helped set me on this path to try to make my own distortion sound different from any other one. But most of the people that are following my brand right now are not aware of Relient K. They’re not aware of my history, but they’re just aware of the pedal and the company as its own thing.

With Relient K playing together again, how do you balance your schedule between the band and 1981?
Well, the main catalyst for the pedal actually launching was the band going on hiatus. We stopped touring pretty drastically in 2017, and I was left to figure out what was next. I started working on all these other business ideas, and I was just finishing the DRV circuit with Jon and putting it out. It was never something I ever expected to be a full-time thing. I thought it would just be something I do on the weekends here and there for fun — build pedals for my friends and maybe people who were aware of the band and had some nostalgia tied to it. I never thought it would be my only thing, but really from the first release, it became very clear that this could be my main thing. Now we’ve just done our first tour as a band since 2017, and it was a big switch to go back out. It’s kind of interesting, because now building pedals is my main thing and the band is more of a side hustle. The band is like “Oh, this is really fun. When can I fit it into my schedule?”

Aside from the obvious musical overlap, do the band and 1981 occupy the same kind of headspace for you, or do they feel entirely different?
I tend to overlap almost every part of both things into my head. I think the main difference for me in 1981 Inventions, it’s just me. I loved realizing that — after being in a band for most of my adult life — if I get an idea and I want to do it, I don’t have to call Matt or any of the guys and get them to agree that it’s a good plan. I can just move forward with it and see how it goes. I love the autonomy of 1981. But there are so many places where they cross over into each other. The DRV, which is my first and only pedal currently, is modeled after the sound I had on our 2004 record called Mmhmm. That pedal does a really interesting and unique job of recreating that sound. My new pedal is called LVL, and it’s my quintessential sound from Forget and Not Slow Down, which was 2009, and also probably Air for Free, which was 2016. It wasn’t intentional, but it’s just a lower gain overdrive, and as I was developing the circuit, I kept wanting more and more gain so that I could play our song, “Forget and Not Slow Down.” I don’t know why I wanted to play that song with this pedal, but I kept tweaking it and tweaking it in order to play that song from that album. 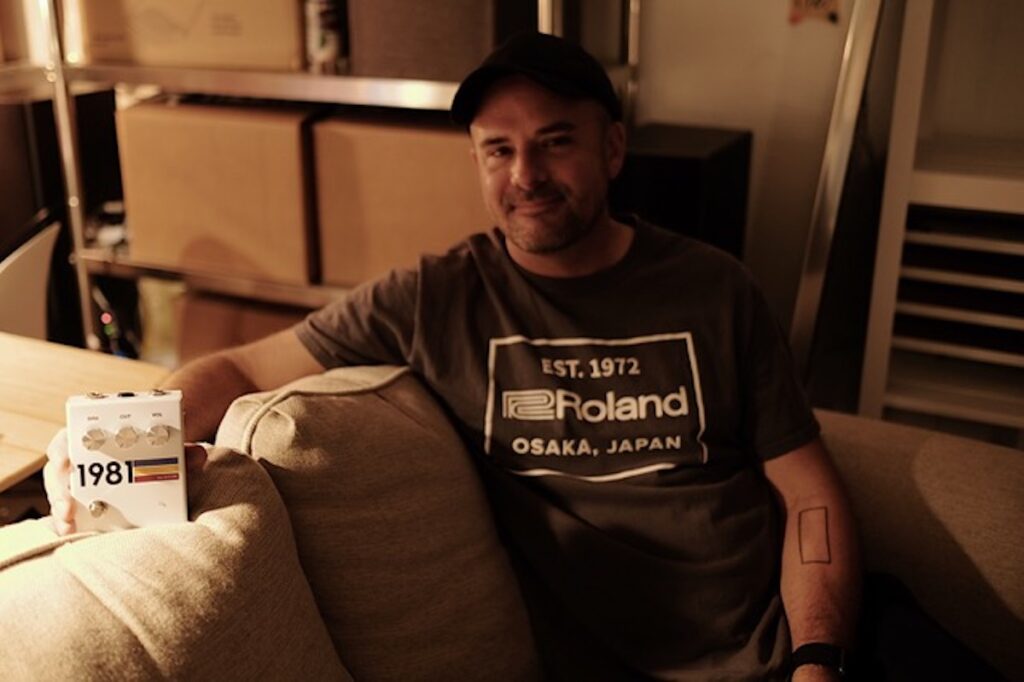 Are there any skills you learned through being in a band that were surprisingly helpful for 1981?
The first one that comes to mind is actually soldering. I had built a couple pedal kits and also got a little bit into modifying pedals just for myself, because I would realize that I could really make a pedal sound very different just by changing a few parts. I’ve been tweaking pedals since the early 2000s. I think the main other one is that I used to run our band’s social media, and I taught myself how to take photos and how to love photography. Even things like marketing, style, and just telling a story. I really learned everything I know about that from running the band’s accounts. I took a lot of that over into what I’m doing at 1981 as a company, but making sure that it has its own unique voice — even though they’re both my voice. It just made me aware of all those things that I think a lot of people, especially in the pedal industry, are not necessarily as aware of in that context.

Is there anything you’d want other aspiring pedal builders to know that you learned coming from the artist side of things?
There’s a lot of the same things in the pedal industry. There are a thousand different Tube Screamer variants. Some of them sound better, some of them sound worse, and some of them are really cool, but not all of them are necessary. It’s not just about what you want to make, but also trying to do something specific. You don’t need to reinvent the wheel — because the wheel has been reinvented many times in the pedal industry, and maybe it doesn’t need to be reinvented again — but I think there’s still room for new sounds and new approaches.

Is that why you didn’t make a Screamer?
I love Screamers. I own probably 22 Screamers in my personal collection, and they’re all a little bit different. That’s actually why I named my company 1981. Besides that I was born in 1981, right around the time that I was finishing my first circuit, I bought a 1981 Tube Screamer and it just changed my life. I could put that Tube Screamer next to every other Screamer I own, and it just sounded different. I don’t know what’s different about it, but man, they just really got it right back then. Right after that, I got a 1985 RAT pedal, which was incredibly monumental in finishing the DRV. I’ve always joked about never doing a Tube Screamer because it’s been so overdone. The Klon circuit is another one that’s been done a lot of times. Maybe I will someday, but I’m going to wait until I have my take on it that I feel is actually necessary.