Hidden beneath all the thumping revelry, newfound freedom, and summertime horniness of MUNA’s marvelous third album, there flows an undercurrent of irony.

The Los Angeles trio released two albums, in 2017 and 2019, on RCA Records, a major label with all the resources a budding indie band could ever need to launch them into the pop stratosphere. Yet MUNA remained on the fringes — well-reviewed with two-dozen dates opening for Harry Styles and The 1975, but far from a household name.

So what would it take for MUNA’s big break? How about signing to emo-folk favorite Phoebe Bridgers’ new imprint Saddest Factory Records (in partnership with Dead Oceans) in 2021, which birthed the queer-love anthem and alt-radio mainstay “Silk Chiffon” (featuring Bridgers) in September and notched the group’s first appearance on Billboard’s Alternative Charts.

Following the single’s success, Katie Gavin, Josette Maskin and Naomi McPherson are poised for an album release that will attract the biggest mainstream attention and anticipation since they began playing music together at USC in 2013. 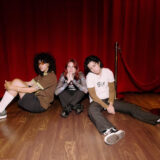 And with the spotlight finally burning, MUNA landed their first knee-buckling knockout, by far the most confident work of their young career. Their self-titled album, out on June 24, explodes with synth-pop hooks revealing ecstasy, reflection and desire — it is an album to be blasted from the moment the weekend begins, until the drunken 3 am stumble into the bedroom, a new friend trailing close behind. Close the curtains and crank it up.

“What I Want,” jumps with a bear-sized bass line and laser-aimed affirmations from Gavin, the band’s primary songwriter, like the earworm refrain: “I want the full effects, I want to hit it hard, I want to dance in the middle of a gay bar” — if MUNA wasn’t already on the precipice of LGBTQ idol status, this line might thrust the members (all of whom identify as queer) over the rainbow’s edge.

“Handle Me,” built around a hypnotic acoustic guitar melody, is more private and sensual: “Grab a fistful of my hair, trace me like an outline” Gavin whispers under the cresting synth. And “No Idea,” another bounce-and-smack Robyn successor with extra Max Martin-molding-*NSYNC late ‘90s influence, is a lusty note to a lover who would dare mistake Gavin as innocent: “You have no idea, the things I think about you when you aren’t here.” The thrilling track was co-written with indie deity Mitski — another artist in her “let’s dance and fuck” era.

Yet a later mid-tempo tune titled “Loose Garment,” which unpacks self-love and forgiveness, is reminiscent of Mitski, featuring the album’s best introspective lyric: “Used to wear my sadness like a choker, yeah, it had me by the throat / tonight I feel I’m draped in it, like a loose garment, I just let it flow.”

The song is then swept away by warm violin and cello, a sort of call-and-response arrangement masterfully shepherded by MUNA, who self-produced the entire album. This may be where the band transcends the million other acts trying to make pop songs defined by their bass and drum programming. Not only are Gavin, Maskin and McPherson thoughtful and expressive songwriters who pen choruses worthy of Dua Lipa or Lady Gaga, but they possess the technical expertise to make an album that’s polished yet versatile, multi-faceted yet singular.

With that, MUNA feels like an uninhibited creation, blending warm-weather pumps with bleeding humanity from three bandmembers in their late-20s still learning how to navigate toxic relationships, recognize their failures and surge forward.

“Runner’s High” explores the art of leaving an S.O., laid over pounding dancefloor throttle — McPherson’s lone instance of too-heavy-handed drum sampling — while the vitalizing single “Anything But Me” is the band’s own “We Are Never Ever Getting Back Together,” a staunch sequel to their 2019 cut “Stayaway.” While MUNA’s comparison to fellow Angelenos HAIM is largely worn out, there’s no mistaking “Anything But Me” as a compatriot of 2013’s “The Wire,” with a similar 12/8 shuffle-chug.

If any one song off MUNA was to act as a thematic centerpiece, it would surely be the country-tinged, Chicks-inspired (Gavin has sung their praises before) single “Kind of Girl,” which toys with the stories we tell ourselves, and how self-acceptance stems from the understanding that no chapter is carved in cement: “I’m not some kind of minor trope, who’s never gonna change — that’s so derivative,” Gavin croons before mandolins welcome a self-help hook about grace and gardening.

And that’s ultimately where this album lives, in the revelation that everything is subject to constant updates and alterations. No future is certain. So why wouldn’t you go out, get drunk, dance ‘til dawn, fuck around, fall in love, break up, love everyone (regardless of orientation) and, most importantly, love yourself for who you’ve been, are and decide to be?

That key message, more buoyant than the band’s past albums, coupled with addictive musicality that’s far too fun to put down after a single listen, makes MUNA the most roundly captivating pop album released so far this year, indie or not. It’s a record to wear out through Labor Day, if not longer.

While the band’s last album was titled Saves the World, this should be the one to morph them into superheroes, offering them the power and platform to commandeer the genre — at least they’re the kind of girls who think they can.