London in the late 1970s was trash. Literally. Every street was lined with bags of refuse. Flies buzzed around moldy garbage that often sat for weeks at a time. The haulers were on strike. Prime Minister James Callaghan ignored the trade unions’ demands for higher pay. When pressed by the media over the widespread strikes, Callaghan remarked, “I don’t think that other people in the world would share the view that there is mounting chaos.”

Meanwhile, around the city, in the abandoned warehouses and the seedy pubs, a noise was amplifying. At first it sounded like a simple eclectic hum. A single frequency crawling out into the world, learning to feed itself. And it did. This noise evolved into something we call a C major chord. Growing, the noise slithered its way to an A minor chord. From there it discovered the power of the D major chord (Lou Reed’s favorite chord, by the way). A G major chord signified the completion of the verse. The noise now had shape.

The noise spread around London like a virus. Young people, distraught at the notion of “the future” seemed to be the most susceptible. Symptoms included spitting in the face of authority, sticking pins through the septums of their noses, and embracing anarchy. In other words, there was mounting chaos. The youth had gone wild. Society’s mores were discarded like trash. For London’s young, there was no future. 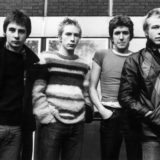 The Sex Pistols burned before they even crashed. What was to be expected? They were a band before they even learned to make music. The Pistols were shot out in the London scene like a heat-seeking missile from inside a smut shop on King’s Road in Chelsea, run by a Svengali with plans to overturn the government by means of phallic-obsessed fashion. The ethos was anti-: anti-government, anti-social, anti-civilization.

In time, the ship of society righted itself. Margaret Thatcher came to power. The trash strikes ended. The Sex Pistols broke up. At least the ones who survived. Sid Vicious, the one member whose only talent was being talentless, was found dead from a heroin overdose in a shabby drug den apartment in New York City’s Greenwich Village. He was 21. An image of his body being removed from the scene became the jacket cover of his posthumous solo album Sid Vicious. Anti-living.

This mounting chaos, the noise that afflicted London’s youth, is now the subject of Pistol, a six-part miniseries on Hulu created by Craig Pearce and directed by Oscar-winner Danny Boyle. SPIN spoke with Boyle about his relationship with punk music, how revolutionary all the players involved were, and, of course, music and girls.

SPIN: To me, this is a story about creating chaos, both externally and internally. From a directors standpoint, how did you approach this material visually? The show is gritty and grimy-looking. At times, I felt my TV screen needed a wipe down.
Danny Boyle: [Laughs.] Can you use that quote, please? You’re absolutely right about the chaos. But I’m also thinking that I’m such a hypocrite in confirming that because all directors are about order. That’s what you’re doing as a director: You’re harnessing talent, and you’re fitting it, and you’re harnessing schedules, and you’re fitting it. That’s what filmmakers do. And what writers do – they make sense of things.

But [the series] was different. I set out to make it as chaotic as possible. And I was clear about that with everyone, all the way through. Because I thought if you try to formalize this story about the Pistols, you’ll lose something that makes it worth telling in the first place. Which is, you have four worthless human beings (laughs) – that’s how everyone viewed them – who bumped into this ludicrous Svengali [Malcolm McLaren], his brilliant wife [Vivienne Westwood], and together they changed the world. Some might say, “bollocks!” but, in terms of my life, they did.

I would not be here today without those events happening. I came from a very similar background, the same expectations, and the class barriers in Britain were so rigid. The country was built on deference. And a deference to stupid people. And the Pistols just blew that apart. They put a safety pin through her nose, they did an alternative anthem, and said, “don’t bow down to these people.” I’ve carried that ethos my whole life. I can’t speak to how that played out in the rest of the world, but I will go to my death telling you that was true about Britain. It also produced Thatcher, so it wasn’t like it produced a Garden of Eden. But there was change.

At this period of time, you were considering becoming a priest, right?
Yeah, I was gonna be a priest at one point. I grew up a very strict Catholic, like John [Lydon, aka Johnny Rotten]. Very working-class Catholic upbringing, where the ultimate career was to be a priest. So, at around 13, I was planning on becoming a priest. And this teacher of mine, who was a priest, said, “I don’t think you should do that. I think you should wait.” And then girls arrived. And music. Then there’s movies and jobs. But the two most important things were girls and music.

Two of my favorites.
I remember this very, very vividly: I was aware of people looking like their fathers, you know, mates. And there was very little gap between young and old. You were young and then you were old and you started to look like your father. You probably followed him into the factory. Or, in Steve Jones’ case, into prison. And you might think you could rebel against it, but it would just happen. And I think what the Pistols did was, with that short bridge [between young and old], they just blew it up. It’s not like they constructed anything in its absence. They just blew it up. So this chasm grew between young and old. We get younger and younger, for longer and longer and the Pistols started that.

Malcolm McLaren seemed hell-bent on overthrowing the British government and music was his weapon of choice. For most kids today, the Sex Pistols, or even Che Guevara, are just a shirt you buy at Hot Topic. What is ultimately the lasting influence of the Sex Pistols? Could you imagine a musical artist today putting so much on the line? The Pistols were dropped from their record labels, like, three times or something.
[Laughs.] They were running out of record labels to sign for. The thing about Malcolm and Vivienne, it was this mixture, where they had a purity of ideas and yet this love of filth and sex and destruction, and they brought the two things together. Sometimes it was admirable, sometimes it was revolting. But that was the point. That was the chemistry that would create chaos. Could you imagine having created a brand that is priceless? A worldwide brand of that notoriety, and he would set about destroying it. That seems insane. Clearly, that was the way he rolled. He followed his instinct.

As a musician, I often watch music-oriented shows and think, “This is not what it’s like, this is not how it sounds.” On-screen, a band is playing live to a clearly studio-recorded track. There’s no atmosphere, there are no beer bottles crashing on cement floors. However, a few times during your series I would hear the wrong note being played. I thought you really captured the idea of being a lo-fi band, who can barely play their instruments, perfectly.
I said, “We’re gonna do everything live” and [the executives] went, “Great. You do know you’ll only be able to use one take that you can’t cut back and forth?” And I was thinking, “Fine. It’s bollocks, I’ll do whatever I want.” They suggested a click track. I said no click track. We’re not gonna pick up eight bars in or whatever. The rules are you have to have a click track, or else every take will be different. And that liberated the actors. Because they were in band camp, learning the songs and the songs became theirs.

They weren’t there to service the cameras. Not only that, there were people in front of them, extras, who hadn’t seen live music in almost six months. Now here they are, getting paid 200 quid, listening to a band play songs, some of which they knew and they went mad. That affects the playing, making it more spirited, which results in bum notes, because they get overexcited. That’s what we went with. We didn’t overdub. You have to set that tone early.

It all comes from the Pistols saying “Don’t follow the rules.”