When Everclear‘s Art Alexakis logs onto Zoom, you can’t help but notice that he’s seated casually in front of a wall of platinum records. “You know, it’s funny, I’ve had them for years and before I got this studio I’d never put them on the walls,” he says.

The studio is a space he shares with his wife, a scant mile and a half from their home in Pasadena. While Alexakis’s side is platinum records and endless racks of gear, his wife’s side is the tonal opposite. “She does healing sound baths and yoga stuff,” Alexakis says with a chuckle, taking a bite of microwave popcorn, “it’s more hippie over there and more punk rock on my side.”

Alexakis is Everclear’s principal songwriter and long-running front person, a band made famous in the mid-’90s with the massive success of singles like Sparkle And Fade’s 1995 runaway smash “Santa Monica” and the subsequent hits in 1997’s So Much For The Afterglow – “I Will Buy You A New Life” and “Everything To Everyone.”

Even their soundtrack offerings cracked the charts. When I tell Alexakis I’m a fan of “Local God” from Baz Luhrmann’s Romeo+Juliet soundtrack, Alexakis sits up excitedly and recounts a tour through Australia at the peak of that soundtrack’s power. “At soundcheck, the president for EMI Australia looks at my setlist and says ‘hey mate’,” Alexakis says with a polite refusal to reenact the accent. “‘Why isn’t “Local God” on here? It’s been number one on three formats here for the last three months!’” 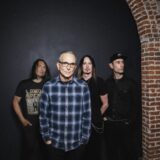 “I didn’t even know it was a single!” Alexakis exclaims.

Those singles spawned the half-a-dozen platinum records lovingly framed and hung on the wall behind Alexakis in his new studio. But there’s an Everclear record not counted among those on the wall. “People come up to me and go ‘man I love your first record’,” Alexakis says with a smirk, “I go ‘you talking about Sparkle And Fade? That’s our second record’.”

This year marks the 30th anniversary of Everclear and moreover, the anniversary of their first LP, World of Noise. Long out-of-print, original copies of World Of Noise have been a collector’s dream for years. “People were buying the album for like 400 bucks,” Alexakis says incredulously. “That ain’t good.”

Alexakis’s dream had always been to remaster and properly re-release World of Noise — an album that has also not been available on streaming services until now — but the time needed to be right. Digging around in a room on the other side of the wall – the one displaying platinum records from the breadth of Everclear’s long and storied career – Alexakis happened upon a box containing the original masters from that first album.

The first record Alexakis made after the breakup of his previous band – Colorfinger – World of Noise is an early look at what Everclear would become. While a lot of the biggest hits of Everclear’s career have been a pastiche of alt-rock and pop, this is a collection of songs that are more immediate and raw. “I think [the songs] are genuine, that album specifically was me being pissed off,” Alexakis says of the album. “I was angry, I was broke, I was on welfare, I had a baby and I wasn’t even sure my band was the right thing to do.”

It’s an album that so few have had the opportunity to hear, it’s been out of print since 1999, and even Alexakis hadn’t revisited it in years. Still, the memory of World of Noise brings the singer to life, “Sometimes you take that energy and your past for granted, it becomes a small compartmentalized thing,” he says. “Listening to this record, digging through all these different mixes and artwork and stuff, that brought up a lot of good memories that weren’t so good at the time.”

World of Noise is decidedly lo-fi, “not because we were cool, just because we couldn’t afford anything better,” Alexakis says with a laugh. His amp on the album, in desperate need of new tubes, would spark with a harsh blue light when things got too heated, creating a cacophony of feedback and noise. World of Noise is so named because it’s an angry record, “musically and thematically” Alexakis says.

“There’s a lot of fuck you in that music, you know?” Alexakis opines, adding, “in a good way.”

Everclear’s world wasn’t upended with the album’s 1992 release, now re-released with bonus tracks and demos that are surfacing for the first time. It would be three years until they swam out past the breaker to watch the world die. In the years since their clamorous beginnings, their songs have shifted and swayed, turning away ever-so-slightly from the harder edge of World of Noise and finding a home in rock music peppered with pop. “Pop isn’t a bad thing,” Alexakis is quick to remind me, “guitar pop, power pop, whatever you want to call it.”

Still, World of Noise is a touchstone record for the band and one that Alexakis was happy to revisit.

It’s a landmark celebrating the first steps of a long journey, one that would take them to heights unimaginable when they were recording a scrappy lo-fi record, sparks shooting out of their guitar amp and all. Platinum records would follow in due time, but with World of Noise, it was about the thrill of discovering what Everclear was made of. “It reminds me that even though times were rough, how much fun rock and roll is,” Alexakis says, “if you’re not having fun making music, do something else.”