Alicia Keys performed at the AO Arena in Manchester last night, and brought out hometown hero Johnny Marr to help her cover the Smiths‘ 1983 hit “This Charming Man.” Though the pairing may seem like an odd one, Keys and Marr actually have history together. In 2014, they recorded a song with Kendrick Lamar for The Amazing Spider-Man 2 soundtrack and performed it together on Fallon.

Watch Keys and Marr cover “This Charming Man” below.

Earlier this year, Marr released his fourth solo album Fever Dreams Pts 1 – 4, and chatted with SPIN about the project. 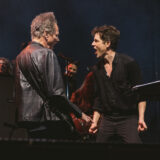 “Well, it was probably when I was running, because I think about what I’m doing a lot, like all artists,” he recalled about how the album’s title came to be. “You can be walking towards your car or you can be pouring a juice or something and an idea just seems to drop down from the heavens. I was kind of like this when I was a kid, really, where plenty of them are just kind of musings, but you know when something taps you on the shoulder and goes, ‘Think about me for the next few days.’ This idea Fever Dreams Pts 1-4 just drops out from somewhere, it might have been walking towards my car, I don’t know. I can’t remember.”

“I just thought, ‘Well, okay, I know a good title when I hear one.’ I was like, ‘What’s this Pts 1-4 all about?’ It gave me an opportunity to do a little bit of lateral thinking and then I just didn’t want to call it Fever Dreams,” he added. “I liked this Pts 1-4. It was intriguing to me. I was going, ‘What can I do with that?’ I had never made a record that was in different parts. Then, I got this idea, ‘Well maybe I can stagger the release and that might be cool for bands.’ This is all before the pandemic. ‘That might be a cool way of doing things. A new way of doing things. I’ve never done that before.’ Of course, when the record company heard about this they thought I was a genius, like some marketing genius. It was purely some artistic thing. I just liked the sound of it.”