More than two decades after it was originally recorded, Neil Young reveals the full details of a Crazy Horse-era album called Toast. The album, Young explained in a lengthy statement below, was “too sad” to put out at the time. It’s an album about a relationship, he said. And the music (“murky and dark”) matches the emotional toll it took on him.

Young said that he decided to shelve the album and move on to the next one. The full Toast album will be released on July 8, 2022. But the first official recording from the record, a gritty rocker called “Standing in the Light of Love,” was released on May 26. Check it out below.

The prolific musician has been opening the vault more frequently these days. In June 2020, Young released Homegrown — his 40th album — which contained music that was originally recorded nearly 50 years earlier in the second half of 1974. It was a hallowed period for Young’s musical output, as it would have been right after On The Beach and before Zuma.

Here is Young’s full message about the lost album, Toast: 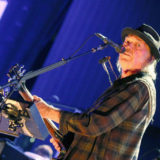 Toast is an album that stands on its own in my collection. Unlike any other, Toast was so sad that I couldn’t put it out. I just skipped it and went on to do another album in its place. I couldn’t handle it at that time. 2001.

John Coltrane, one of my heroes, made some music at ‘Toast’ studio back in the day. It may have been called ‘Coast’ then, but maybe not. The name changed a few times back and forth. It was on Mission in SF. The back door opened onto an alley. It was so stuffy in there that we left the door open until one day we saw rats coming in and out. After that, we just went outside for a smoke.

The music of Toast is about a relationship. There is a time in many relationships that go bad, a time long before the break up, where it dawns on one of the people, maybe both, that it’s over. This was that time.

The sound is murky and dark, but not in a bad way. Fat. From the first note, you can feel the sadness that permeates the recording. That song, with its refrain, “Don’t say you love me,” is called “Quit.” The next one, sort of like a Deep Purple hit, is called “Standing In The Light.” “I don’t wanna to get personal, or have you put me on the spot” is the opening line. Followed by “Goin Home,” these songs paint a landscape where time doesn’t matter – because everything is going south. A lady is lost in her car. The dark city surrounds her – past present and future. It’s a scary place. You be the judge.

Then the scene changes to a religious guy who just lost his job. He’s turning on Jesus. He can’t cut any more trees. He’s a logger. Finally, The “Gateway Of Love” beckons with “background noise on a changing sky.” I had forgotten about these songs, put them out of my mind and went on living my life.

It must be said that here Crazy Horse shows a depth never seen or heard before. The greatest group I have ever met. This is a pinnacle. Where they let me go, where they took me, was unbelievable. I couldn’t stay. Then, “I’d like to shake your hand, Mr. Disappointment.” I see you now eye to eye. Murky and dark. There’s no mistaking it. How can you be so real and intangible? So we continued on down on the path. “She’s a healer.” But not this time. It’s Toast.