Ahead of the June 17 arrival of his 4AD debut album, Farm to Table, Bartees Strange has released “Hold the Line,” a song he wrote in honor of the late George Floyd’s daughter, Gianna.

“I remember watching George Floyd’s daughter talk about the death of her father and thinking wow — what a sad introduction to Black American life for this young person,” Strange said. “It was painful to watch her grow up in that moment, like all Black kids eventually do.”

In response, Strange wrote “Hold the Line” over the course of three days during the first pandemic summer of 2020. “Through this song I was trying to make sense of what was happening in the U.S., my neighborhood and my community at that moment,” he said. “During the marches, people were trying to stop the bleeding, locked arm in arm, doing everything they could to hold the line.” 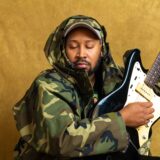 Bartees Strange Is Exactly Where He Needs To Be

Led by the pre-release tracks “Heavy Heart” and “Cosigns,” Farm To Table finds the Strange “celebrating the past, moving towards the future and fully appreciating the present,” according to a statement. After its digital release next month, the album will arrive on LP and CD on Oct. 7.