On Middling Age, Tim Kasher Doesn’t Always Want to Be a 47-Year-Old Rocker

Sitting in the mostly-enclosed former midcentury Firestone Tire shop that has since been transformed into All Season Brewing in Los Angeles, Tim Kasher wouldn’t be anyone’s first guess when picking who was the biggest rock star among the crowd. On a Friday afternoon filled with LA’s finest yoga pants, tight t-shirts and oversized sunglasses, Kasher’s long baggy sleeves and slim stature don’t really give off the appearance that he’s arguably one of the most influential indie songwriters of the century.

But two successful bands (and a couple of less successful ones), five solo albums and 19 years since he forever shifted the indie/emo/art-rock landscape with Cursive’s The Ugly Organ, that’s exactly who Kasher is.

Middling Age, the 47 year old’s latest solo work (out now via 15 Passenger Records), is pretty perfectly representative of Kasher at this point in his career. It’s intimate and introspective, yet it gets distinctly weird and artistically dissonant at times. It’s a stripped-down “solo” album, yet it happens to include a variety of longtime friends and collaborators like Laura Jane Grace (who Kasher is touring with next month), Jeff Rosenstock, and members of Cloud Nothings, Cursive and the Mystic Valley Band. It’s the latest collection of realistic and relatable songs from your favorite songwriter’s favorite songwriter.

As Kasher sips on a light beer with a side of whiskey, he begins discussing how writing and recording Middling Age wasn’t actually that different from his previous solo albums — except for the whole global pandemic thing. 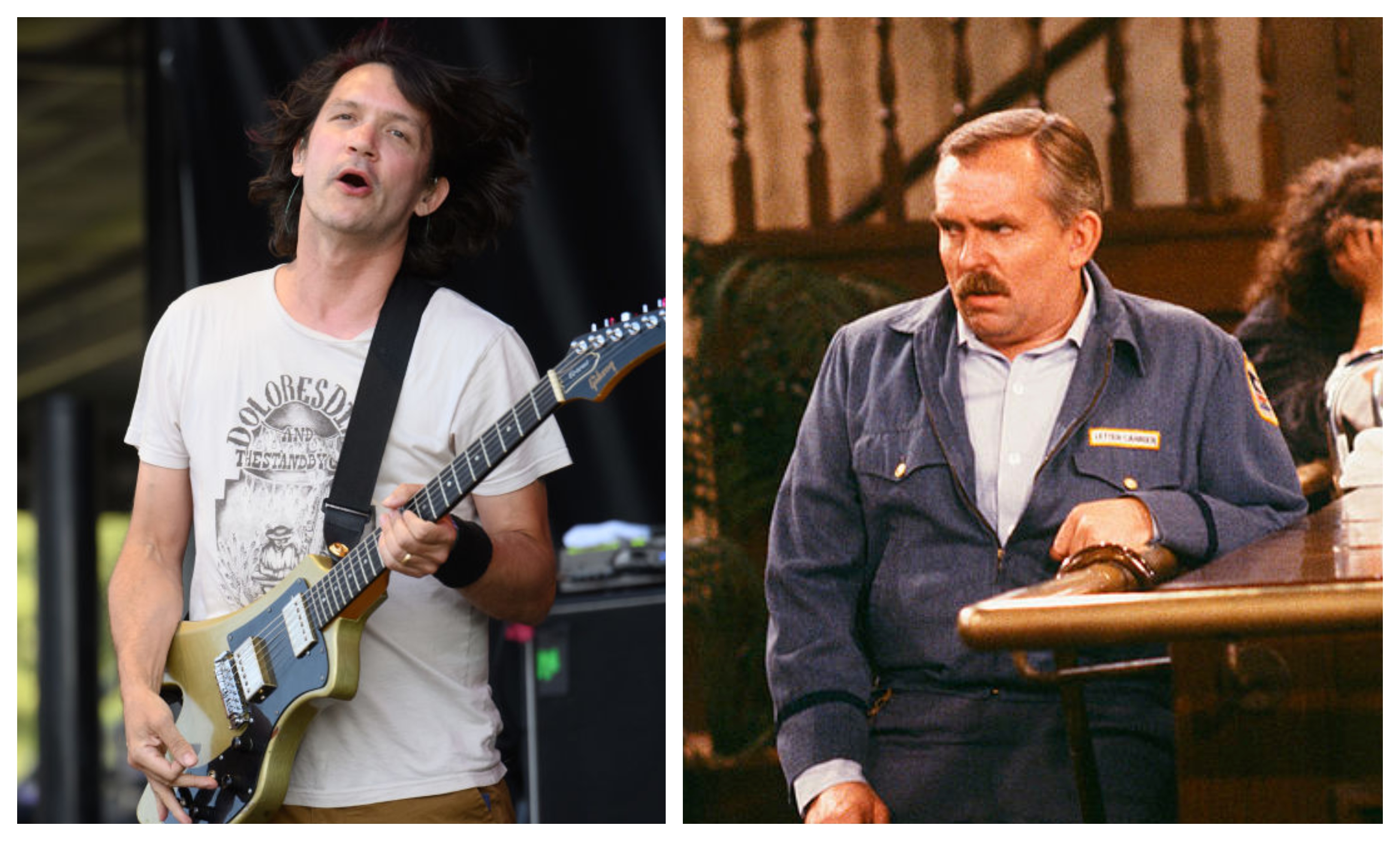 “It wasn’t so different from the other solo records, but certainly different from Cursive and the Good Life,” Kasher says. “I just don’t have anyone to bounce ideas off of, so as a result, I write a lot more. I wrote a ton of songs for this record — and that might just be my personal safety of making sure that the songs are good enough since I’m not really bouncing them off of other people. I also worry about my tastes lining up with the public, so I don’t always know if I’m picking the right songs or not.”

He’s been in the industry long enough (as in three decades) to know that whatever songs he chooses, some people are going to prefer the b-sides that get left off the album. It’s a fact that’s remained pretty consistent across his 20-plus album discography (because “We all like to root for the underdogs”), but it’s never stopped him before — nor will it slow him down now.

With Middling Age out today, here’s what Kasher told SPIN about the album, his impending tour and much more over a couple of drinks.

SPIN: Middling Age is probably more stripped-down than anything you’ve ever done before. Did you intentionally set out to make an album that’s largely just you and your guitar?
Tim Kasher: Yeah, it’s really intentional. I’ve been trying to do records like this for decades, and this is still not nearly as stripped down as I intended it to be. The way I tend to see it at this point is that it takes a lot of confidence for me to let a song just be “ready.” Maybe that’s normal, but like I got really pumped on the last Laura Jane Grace album because of her attitude and approach. Those songs really feel like stripped-down Against Me! songs, and you can hear that they’re rock songs. Having the confidence to do a song like that — just acoustic and my voice — is tough for me to do. I want to do something like a Nebraska album, but I’m still getting there.

Speaking of Laura Jane Grace, what was it like to bring her and some of your other friends on to this album while everyone was locked down in their own homes?
I mean, [the pandemic] was probably why it worked out. I think that on a normal Tuesday, if I were to ask Jeff Rosenstock to do a sax solo on a record, he would probably be like “I’m slammed. Maybe I can get to it in a few months.” But now, it really was just like “Oh, sure. Sign me up.”

In addition to having a bunch of friends on the album, you’ve also got a tour coming up with Laura Jane Grace and Anthony Green. Is that show going to be as insane as it sounds?
I really don’t know yet, but they’re both really pumped, and I’m also pumped. We have a text thread going daily just to get ready for it, and we’re all just kind of daydreaming about it and speculating about what we’ll do and what will be part of the show. We’re also traveling together on one bus and sharing a band, so that band will be doing three sets. Even though we’re doing three separate headlining sets, we’re still traveling and working together as a band, so it’s kind of like a new band — at least for the month of May. There’s a lot of fun in doing something new and different, which is a lot of what I had in mind for doing it. Similar to the album, I was also very surprised at how effortless it was to put the tour together, which was nice.

Looking back on your career to this point, you’ve basically had three different music careers that would likely appeal to three different audiences, with Cursive, the Good Life and your solo work. How does that feel to have this huge body of work, but one that’s kind of divided among these different groups?
I do wonder if I maybe shot myself in both feet at different times of my career because of my own prolific songwriting. I always want to keep going and going, and I’m always active and ready to do another record. First, I started the Good Life to satisfy that, and then I started doing solo stuff a decade later. Now I’m juggling the three and I do worry — at my lower self-esteem — if it’s like “Well, you could have had one more successful thing instead of three things with a really slow career trajectory.” But also, who cares? I’m just doing it the way I want to do it. I also probably had to deal with it this way, because when I’m finishing up one project, I really just want to step away from it and get excited about the next one. That attitude hasn’t changed in over 20 years now, so it’s just the way I’m wired, I guess. That’s why I’ve left Cursive a few times and the Good Life at least once — but I try to never do that anymore. The bands actually helped me recognize that I should probably just stop saying “I’m done” because I’m just done right now. “You’re done today, but you’ll probably be back.”

Having hit so many different genres over the course of your career, does writing a solo acoustic song feel different than a borderline-punk Cursive song or a more upbeat song for the Good Life?
Yeah, but I think that a lot of the differences are a little bit obscure even to myself. I think the Good Life and the solo stuff are like siblings, whereas Cursive is more likely a cousin or something further branched off from them. But those all stem from my different interest in music. I get excited about hard rock and prog rock, and I want to be a part of it with Cursive. The Good Life’s gone through a few different incarnations, because initially, I was excited about Portishead and then I got excited about Elvis Costello. I think there are some throughlines with all of my stuff back to the very late ‘80s and early ‘90s when I was writing songs for my pre-Cursive bands, but now I want to make it more interesting than I did when I was younger. Back then, I was more accepting of my solo songs just sounding like Paul Simon or whoever would just fit into Americana, but that just seems so much less appealing to me now. Maybe the writing was alright, but I also recognize now that Cursive is a major part of my songwriting style, so I want to keep things dissonant and a little bit darker and more peculiar — even if it is with just an acoustic guitar.

And speaking of that difference, how have you noticed your songwriting change now that you’re not just an angry young man anymore?
I want to say it’s evolving in a positive way. I write so much more now than I used to, and I think there’s something kind of old and obsessive about it — and maybe all that comes with getting older. I write so much more than I used to, but I don’t know if that means it’s improving. If anything, I’m sure most people would probably say that it’s just getting worse, which is fine. That’s just the way it is. It’s an uphill battle. I might just be overcompensating and feeling like I need to write three or five times as much to find those 10 great songs that can rival my older catalog, but I think a lot of it is just the joy of writing. I just want to stay busy and do it. I’m always trying to write better and better, so it’s always an ongoing challenge.

Middling Age is obviously about getting older and how life changes as you age, which is generally something that no artist wants to tackle. What was it like to look introspectively like that and be able to write these songs about the depths and mundane aspects of adulthood?
Well, part of it is that I don’t see how these adults are still writing songs about being mad at mom and dad and like punching their locker. I feel pretty fortunate that the audience that I’ve had for so long wanted to grow up with me, so that emboldens me to be like “It’s OK to sing about the mundane aspects of getting older.” I do grapple with not wanting to be a 47-year-old rocker, because when I was 21, I felt like a 47-year-old rocker should just die. I’ve grappled with that over the years, but I can’t fabricate any other existence. Ethically, I feel I need to write about my personal experience from whatever vantage point I have. Otherwise, I feel like I’m being a traitor or an asshole who’s still mad at my mom and dad. I’ve also always been a believer that there’s not necessarily a redundancy to touching on the same topics, because you’re always approaching them from a different vantage point. Relationships, religion, economics, politics — they’re all different now than they were 10 years ago, because we’re aging and society is changing.