The Interrupters Announce In The Wild, Unveil ‘In the Mirror’

Home » New Music » The Interrupters Announce In The Wild, Unveil ‘In the Mirror’

The Interrupters have a new album on the way. Titled In The Wild, it will be their fourth studio album and will be released on August 5 via Hellcat/Epitaph Records.

Today, The Interrupters released the album’s first single, “In the Mirror.”

The clip for “In the Mirror” has elements of classic Hollywood and music videos, including The Twilight Zone, Orson Welles’ Lady From Shanghai, the Talking Heads’ “Once in a Lifetime,” The Police’s “Every Breath You Take,” and even the glamour of photographer George Hurrell. 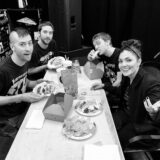 Tacos With the Interrupters

“We put SO MUCH LOVE into this album,” the band said in a statement. “Produced by our very own Kevin Bivona, this album takes you on a journey throughout Aimee’s life and every song is a deep delve. We recorded almost the entire record in our home studio during the lockdown which as we all know was a turbulent time for everyone. The making of the record allowed us to have purpose and to rid our closets of all the skeletons lurking.”

The 14-track record includes features from Tim Armstrong, Rhoda Dakar, Alex and Greg from Hepcat, and The Skints. The band’s guitarist Kevin Bivona produced In The Wild, while it was recorded during lockdown in a home studio built in Bivona’s garage.

Following their support on the massive Hella Mega Tour (Green Day, Fall Out Boy, Weezer) last year (we caught up with the band after their first show in Dallas), the band is slated to co-headline a tour with Flogging Molly this summer. Tickets are still available, and they’ll be on the road from June until late September.

In The Wild follows The Interrupters’ 2018 Fight The Good Fight.