In that time, she’s gone from a 13-year-old with pop star dreams to one of the most eternal and viral internet sensations of all time to an electronic alt-pop singer capable of putting on one of the most over-the-top and ridiculous Coachella DJ sets in recent festival history.

During her early Saturday evening “Rebecca Black & Friends” set at the Do LaB, Black introduced a wide variety of guests, including Big Freedia, bass phenom Blu DeTiger, and Slayyyter (with who she collaborated with last year) — while also busting out a stadium-style t-shirt cannon to fire into the crowd shirts reading things like “REBECCA BLACK REPLACED KANYE WEST AS THE COACHELLA 2022 HEADLINER” and “I LIKE REBECCA BLACK AND I CAN PROVE IT DUE TO THE WEARING OF THIS TSHIRT.”

For Black, the set was a long-anticipated peak she was never quite sure she would reach. Sitting on a low pink chair in what is effectively a large black tent serving as a makeshift green room behind the Do LaB’s stage just minutes after the performance ended, the 24-year-old still isn’t exactly sure what to make of the raucous party that she just hosted. 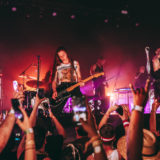 Code Orange Were Born to Be Coachella Misfits

“When the Do LaB and Coachella said that they wanted to do this, I was like, ‘There’s no way this is real. I feel like we’re getting scammed,’” Black laughs, the bass of the DoLaB’s next performer interrupting her every couple of words. “I say that as somebody who’s been a longtime fan of the festival. I’ve come here every year. Especially with my own history, this was one of those things that’s always been on my bucket list, but I genuinely never thought I was gonna be able to do. I’m still processing it. It was fucked up.”

In this case, Black’s performance was “fucked up” in the best possible way.

With a crowd size usually reserved for surprise appearances (like Diplo on Friday night) or Do LaB headliners, the late-afternoon set provided the kind of sheer chaos that Black seems to thrive in these days. Her flowing white dress served as the perfect complement to the array of bright colors donned by her guests — musicians, acrobats and other friends alike — making her the glue holding the giant LGBTQ party together.

Of course, those familiar with Black’s work in recent years couldn’t have been too surprised by the spectacle. Last year’s Rebecca Black Was Here EP was distinctly further outside of the norm than her previous work, and December’s “Read My Mind” took things to another level. The track (which featured Slayyyter) came with a video that saw the duo go from convenience store clerks to hypersexual glammed-up blondes featuring talon-like nails and impossibly massive breasts.

“Working with Weston Allen on that video and the ‘Friday (Remix)’ video and a bunch of other stuff, he always knows how to either take my crazy ideas — or push me into crazy ideas that I never would have dreamed up — to create something that will make people that’ll bring the song to life in a bigger way than I ever could,” Black says. “Plus, I love boobs, and I love appreciating boobs. I’m so glad people thought that video was as ridiculous as it was.”

But it’s not all giant fake titties and blonde wigs for Black. It likely would’ve been fairly easy and predictable for her to boost her 2011 internet fame (or infamy, for those who consider “Friday” to be among the worst songs of all time) into a middling pop career. She was — for better or worse — one of the most recognizable kids on the planet at the time, and there’s no doubt that some suit-wearing executives could’ve parlayed that into a record deal and reality TV appearances for at least the next handful of years.

However, a legal dispute with the company that produced “Friday” and its unbelievably popular music video led the singer to a different road through the music industry. In the midst of her success, Black (and her mother, seeing as it was right around her 14th birthday) launched her own record label and decided she would go the indie route — taking full control of both her music and her YouTube channel.

More than a decade later, that independence means that Black still gets to do more or less whatever she wants. With two EPs and about two dozen singles in her discography, the California native has been slowly introducing people to who Rebecca Black is as a young adult. Sometimes that means releasing a 10th-anniversary remix of “Friday” featuring Big Freedia, 3OH!3 and Dorian Electra, and other times it’s about hosting two different parties on Coachella’s opening day — not including her set at the festival itself.

“I try to take it one step at a time and just do whatever feels right,” Black says. “That’s the only thing that’s ever worked for me, whether it might make sense to somebody else or not. That’s also a huge pro about being an independent artist. I really get to do what I want to do and what those who are closest to me want to do. My goal is to take things as far as I can, but I don’t know what the future holds. I really like to just let the people who get it, get it — and I don’t worry about the people who don’t. Right now, the gays definitely get it.”

Despite her high-energy whirlwind of a set, there’s a certain calmness to Black that only comes from experience. She’s in the rare position of having spent a decade in the music industry, still being in her mid-20s, and seemingly still managing to be relatively self-aware and well-thought-out, both as an artist and as a human being.

This thoughtfulness is made particularly clear when Black reflects on her particularly abnormal teenage years. The amount of attention, adoration and abhorrence she received from strangers on the internet would be enough to drive most adults off of the deep end, yet she made it out the other side as a teenager and stayed composed enough to transform herself into a musician who doesn’t need to rely on the nostalgia of her first hit (which peaked at No. 58 on the Billboard Hot 100 and topped the Heatseekers chart, regardless of how much of a joke it became) to draw fans around the world. Hell, Black even makes her childhood seem tame compared to what kids go through today.

“I just think of it as being a part of the generation that has grown up on the internet,” Black says, Coachella’s winds blowing the room’s black tarp walls all around her. “Even now, I’m watching this TikTok era, and it feels so different from what I went through. I give so much credit to the way that the internet and my generation kind of appreciates nostalgia, and I think that — combined with where pop music is going — has contributed to where I’ve been able to get to now. I don’t understand a lot of the ‘new’ [internet culture] half of the time, but I think I just try to speak to my fans and the people who have supported me as best I can.”

The good news for Black is that she’ll get plenty of opportunities to reach that audience in the coming months. In addition to some festival appearances and an upcoming European tour, she just finished her debut full-length and hopes to have it out sooner than later. After two singles and an EP in 2021, Black feels as though she’s ready to take the next step as an artist — and while she knows her name will always carry certain connotations for some people, she’s also looking to defy expectations and show the world just how much she’s grown over the years.

“I feel like I have pushed myself harder to make a project that is not just ‘good,’ but to make something that is as good as the artists that I really appreciate,” Black says. “The jury’s still out on whether or not I did that, but I want to be taken as seriously as everybody else who works as hard as I do. Musically, maybe it’s not what people would expect me to do — especially if they aren’t familiar with what I’ve been doing.”

While some may see it as a bit of a rebirth for Black, she’s quick to point out that it’s a little ridiculous to consider this “Rebecca Black 2.0” when she’s still younger than a lot of debuting artists. Unless we’re going to start counting everyone’s middle school projects and high school bands as the beginning of their music career, it’s understandable why Black is taking the “don’t call it a comeback” approach. It just so happened that her early teenage efforts reached a lot further than the local battle of the bands.

“It’s crazy to see the reactions, because I feel so young — and everyone reminds me of how young I am — and then I see people call it a comeback,” Black says. “I feel like I’m finally just starting out. I found a sense of freedom to be able to do what I want, and I feel like I’m finally saying things for the first time ever. You never know what people are gonna think, and all you can do is trust whatever it is you put out there. I don’t know. I feel like I’m 40 years old sometimes, but I’m not. I’m not!”