Code Orange Were Born to Be Coachella Misfits

For a few minutes as Code Orange’s gear was being set up for a daytime gig on Coachella’s opening weekend, things were looking grim. The festival’s club-like Sonora tent was mostly empty, with scattered fans up front and rows of couches along the walls filled with reclining festival-goers recovering from the desert heat. It wasn’t an ideal scenario for one of the band’s usual wild, enraged performances.

When the six players finally stepped onto the stage (to the ethereal, cerebral sounds of Bjork’s “Hunter”), they looked like they were ready for a fight. Dressed as commandos and garage-rockers, Code Orange quickly erupted with the single “Out for Blood,” all crushing riffs and industrial-strength rage. Singer Jami Morgan, sporting a motorcycle jacket and black shorts with the sides of his head shaved, shouted “What’s up, Coachella motherfuckers!”

By now, fans were streaming into the tent. The dance floor was getting crowded while the overheated fans on the couches quickly cleared out. Morgan, along with guitarists Reba Meyers and Dominic Landolina and bassist Joe Goldman, were in a tight circle at centerstage, bouncing and kicking and spinning to songs from their last album, Underneath. It was a full-frontal attack, wild spasms of sound, and unexpected hooks amid the noise.

A real mosh pit got going for possibly the first time that day, and Morgan ran along the stage, slapping the hands of fans reaching upwards. 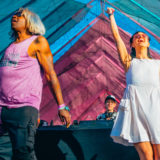 Near the end of Code Orange’s 40-minute set, the frontman cleared the air with an impromptu speech. “Listen, we know we don’t fucking fit in here! We’re not fucking stupid,” he yelled, referring to a Coachella 2022 lineup that leans heavily toward pop and hip-hop. “It means a lot to us to have anybody here, to have you guys here … So, thank you so fucking much! This is a real band, who’s been working real hard for a real long fucking time!”

Code Orange is a modern hardcore band, which inevitably made the sextet outliers at the massive international music festival. In its early years, Coachella was largely a venue for alternative rock, progressive hip-hop and forward-leaning dance music. While ticket-holders this year could still chart a complete rock experience at the festival (IDLES, Turnstile, Måneskin, Chicano Batman, the Hu, Spiritualized, etc.) if they chose, the weekend balance of sounds shifted when Rage Against the Machine dropped out as this year’s headliner after two COVID-19 postponements.

“Story of my life — we’re always on the wrong end of timing,” Morgan says after Code Orange’s set, seated outside of the band’s dressing room trailer, parked beside those for the rock acts the Regrettes and Amyl and the Sniffers. “It’s just adversity, but I’m proud of what we did and I had fun. I thought it was a good show. We always want to kill it. But there’s definitely a lot of pressure on ourselves because we want to do our absolute best when we’re on any kind of elevated stage.”

Most of the band is sitting nearby, including drummer Max Portnoy and keyboardist/programmer/guitarist/singer Eric “Shade” Balderose — who’s wearing a T-shirt reading “CODECHELLA,” with a smiling female face from the film Midsommar.

“The movie’s about a weird fuckin’ cult-sex-creepy-weird situation in a place that looks a lot like this,” Morgan says with a grin of his pastoral surroundings. “So we thought it would be kind of funny and apropos.”

The shirt was rejected for sale by the festival, although the band may or may not have sold it at some of its other SoCal shows surrounding Coachella.

Code Orange, who began as the Code Orange Kids in 2008, are a band on a mission. Even as a gang of intense young misfits who have occasionally been compared to the weirdo cast of 1997’s Gummo, the band has found some surprising mainstream acknowledgement during their steady rise from the underground, with Grammy nominations in 2017 and 2020. The Coachella gigs — which they agreed to when RAtM was still the headliner and would’ve drawn a more rock-friendly crowd— alone would be coveted by almost any rock band.

“It’s crumbs compared to what I want,” Morgan says. “I’m grateful. I’m proud. But we are not satisfied with what we’ve accomplished at all in any way, shape or form. And if I even think about it too long, it’s gonna piss me off.”

On the hard rock scene, Code Orange could be counted among a new movement of raging metal/hardcore/punk/etc. artists that includes highlights like Baltimore’s Turnstile and Dallas’s Power Trip.

“Sometimes I feel like we’re part of something, but I don’t know,” Morgan says. “Everyone has their own path. There’s a lot of great bands doing great things. Turnstile kind of burst through that bubble recently, so I’m proud of them. They’re a great band, but they don’t really sound nothing like us.”

Code Orange has about three more weeks of touring still ahead of them, followed by a trip back to Pittsburgh to work on their next album. With 30 songs written so far and promises to “try some things different on many levels,” the new material may not sound like what long-time fans have come to expect.

For instance, the intense-but-catchy “Out for Blood” doesn’t necessarily hint at the sound of the next record, Morgan insists. That was just another flavor to try out, landing somewhere at the nexus of Nine Inch Nails, Ministry and Rob Zombie. The track was more direct than the ambitious experimentation of Underneath, and was controversial to some listeners. But as per usual, the band has no regrets.

“We do what we think needs to be done,” Morgan says. “We don’t follow. We lead from the front. Sometimes people like it, sometimes people don’t. We run the gamut.”

Right now, Morgan is just looking forward to enjoying the rest of the festival as a fan, since Code Orange decided to stay the whole weekend. (“Hope it was a good decision. We’ll see!” he says with a laugh.) He’ll be checking out Danny Elfman’s outdoor set later that night, a mix of movie scores (Batman, Edward Scissorhands) and offbeat rock songs that date back to the early ‘80s. The music would sound nothing like Morgan’s band, of course, but be just weird enough to represent at least one kind of uncompromising career path. It’s all the more inspiration for a band determined to push themselves into uncharted territory.

“We’re going to go back to the drawing board and figure out what we need to do,” Morgan says. “It’s kind of a weird limbo where you see what needs to happen, and now you’ve got to go do it. Ask anybody who knows me — they think I’m insane. I’m obsessed with it. I’m not obsessed with success, I’m obsessed with taking this art project that we call Code Orange to the absolute maximum.”