Weezer is presenting one of their most exciting projects to date, SZNZ, a four-EP-long cycle through the seasons. At the start of each season in 2022, a corresponding EP will be released via Crush Music/Atlantic Records.

Weezer debuted “A Little Bit Of Love,” the first single for the SZNZ Spring volume, which is a light and fresh song that builds anticipation for the rest of the project. SZNZ: Spring was produced by Jake Sinclair, Ethan Gruska, and Suzy Shinn will be released in its entirety on March 20, the spring equinox.

Weezer is set to debut “A Little Bit Of Love” on March 21st  as their first installment of a seasonal residency with Jimmy Kimmel Live! The band is also the first to do a residency on the late-night show.

Each SZNZ release will have a distinct color palette, emotional tone, and other corresponding seasonal sounds and qualities. The EPs are all being recorded weeks before they are released, within the seasons they document. The SZNZ vinyl is available for pre-order on Weezer’s website here. 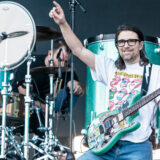