The Regrettes announced the release of their third studio album, Further Joy, on April 8 via Warner Records. The indie-rock group has not released an album since their 2019 project How Do You Love?

When asked about the album title, frontman and songwriter Lydia Night said “that phrase, ‘further joy,’ summarized what it meant to be on the hamster wheel of constantly chasing happiness, but in turn, that’s what makes you unhappy. I was stuck in a loop of wanting to be better, wanting to be good, and therefore I couldn’t be here. I couldn’t be present.”

After meeting for a 10-day writing retreat in Joshua Tree (which they told us about in September), the band found themselves struck by inspiration and began quickly putting together demos via zoom writing sessions and working with producers Jacknife Lee and Tim Pagnotta.

The new single “That’s What Makes Me Love You” is accompanied by the release of a music video. The pastel indie-pop serenade is imbued with Night’s sickly sweet romantic lyrics. The inspiration for the single comes from Night’s own relationship. 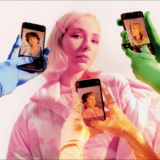 The Regrettes are kicking off a North American tour in early March, which includes dates at festivals like Coachella, Bonnaroo and Firefly.