Silk Sonic, J Balvin, Carrie Underwood, John Legend, Maverick City Music, Aymée Nuviola and Billy Strings have joined the performance lineup for the 64th Grammy awards, which will be held Sunday (April 3) at Las Vegas’ MGM Grand Garden Arena and broadcast live on CBS. Silk Sonic, the duo of Bruno Mars and Anderson .Paak that is up for four Grammys, will open the telecast.

The performances by Maverick City Music, Nuviola and Strings are meant to “showcase Las Vegas and spotlight genres not historically represented on the Grammy Awards telecast,” according to the Grammys. 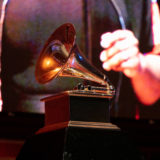 Grammys Moved to April, Will Take Place in Las Vegas

Beyond his performance on Sunday, Legend will receive the maiden Recording Academy Global Impact Award at the Recording Academy Honors, presented by the Black Music Collective. That event will be held the night before the Grammys at Resorts World Las Vegas.