The final chord of “Bad Scene, Everyone’s Fault” had barely faded into oblivion when Blake Schwarzenbach laid himself bare.

Standing on stage at Seattle’s Showbox Sodo, a relatively intimate venue cowering in the shadow of the baseball stadium up the street, and tuning his guitar, the mercurial leader of the recently resurrected punk outfit Jawbreaker admitted that was the first time the band had played the song live. It never felt right for the trio to trot that tune out in the past, he said, due to the rising tide of pop-punk groups coming up behind them.

They missed their chance, he went on. “If I had kept on that road, I could be Machine Gun Kelly. I could be hanging out with Kardashians.” Instead, Schwarzenbach admitted, he was still living in a studio apartment in Brooklyn.

The moment was played for laughs by the rangy singer/guitarist, but later on in the set, he peeled back the curtain even more. “We’re starting off this tour playing in once glorious cities. Seattle, Portland, San Francisco.” The idea, he said, was to get some “hard currency” in their pockets while they still could. 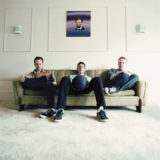 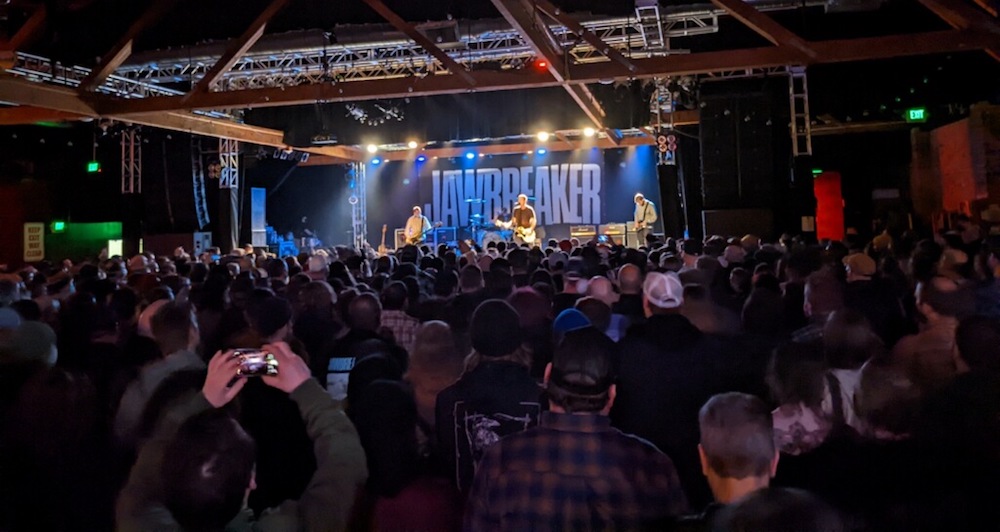 It was all said with a touch of irony on Schwarzenbach’s tongue, but there was more evidence that it wasn’t all bullshit than not. The hefty ticket price. The $150 commemorative skate decks and $30 branded Zippos at the merch table. The lack of conviction shown by almost everyone on stage, from the roadies to the performers. By the main set’s end, all three members of the band scooted quickly away from their instruments and their touring guitarist, who also doubles as Schwarzenbach’s guitar tech, trudged off to tune.

How much honest sentiment can Jawbreaker really be expected to give to songs that are so innately bound to the combustible emotions and vices of their younger selves? They’ve long left behind the days of cigarettes and beer in El Sobrante and coloring outside the guidelines. Now in their mid 50s, they’re sticking to Acqua Panna and punching the clock on a set celebrating their 1995 album Dear You.

They played every song from their sole major label release, scattering in only a few older tunes, primarily from 24 Hour Revenge Therapy, the 1994 album that saw Jawbreaker leveling up as songwriters. And they handled the opening night set with a workmanlike attitude: heads down, sweat visible, i’s dotted, t’s crossed, bottles kissed.

Every now and again, the trio would fully lose themselves in the power and the passion of their twenty-something selves. The layers of volume kept rising as they laid “Accident Prone” onto the grindstone and the sparks it sent through the room felt like pyrotechnics. Through “Jet Black,” Schwarzenbach seemed to wince as he tapped into the long collapsed vein of regret and recrimination that once drove him to write this autopsy of a dying relationship. He even fought back the ruefulness he could have otherwise given to many of the lines in “Boxcar” and helped charge that nearly 30-year-old song with some new fervor.

If Jawbreaker seemed to lumber through much of the rest of the set, it’s entirely forgivable. (At one point, Schwarzenbach openly regretted putting so many words into his songs as they were hard to memorize for these shows.) They’re not young men anymore, and for all the rehearsals they clearly went through, this was just the first mile of a 10 date marathon. The final show of this truncated run in late April might feel decidedly different.

Did anyone in the capacity crowd at the Showbox SoDo notice anything less than genuine in Jawbreaker last night? From the way they responded to the opening notes of each song and shouted every lyric back at the band, it sure didn’t feel that way. A rough scan of the room showed that the majority of attendees were at or around the same age as the men on stage. For all the comments about the realities of middle age made by Schwarzenbach and comedian Kyle Kinane, who started the night off with a 15-minute set, the concert did as all legacy concerts try to do: stave off time’s dull forward march for a little while. Stretching a vintage Hüsker Dü shirt over one’s soft body and chanting the lyrics of “The Boat Dreams from the Hill” is a gentle pump of the brakes on an otherwise bumpy drive to oblivion — something to be reminded of while staring at the $50 commemorative poster on the wall.