Back in 2016, when this column had a different name in a different publication, I stumbled upon Italian doom band Messa and their debut full-length, Belfry. It lit in me a particular fire — a fire signaling that this band could really cross over.

While Belfry could go into dimly lit drones and dark jazz excursions, the band never lost sight of doom fundamentals — crushing riffs that leant to a suffocating yet enticing atmosphere, and a captivating vocal performance from Sara Bianchin, who strikes that sweet spot of virtuosity and bluesy warmth. When it hits, it hits. Familiar yet enticing, Messa definitely had everything in line for a wider audience.

They recently released Close through Finnish indie label Svart, and they’ve cut through the fog in more ways than one — not only do they sound brighter, but they’ve also locked in on where they excel. Bianchin is rightfully at the center, and “Pilgrim” really moves with her, the guitars surging at her behest. “Ruebdo” moves towards blast beats and guitar freak-outs (Alberto Piccolo and Marco Zanin are more versatile than most stomp-and-plod doomers), but the greatest force is her shift between darkness and light.

There’s also a Mediterranean air in “0=2” and “Orphalese” — not just in the breezy acoustic instrumentation but also in the feeling of running into elite musicians on the street. (Could al fresco doom become a thing?) Again, they revive elements that seem almost beaten to death, letting them truly breathe and energizing them once again. 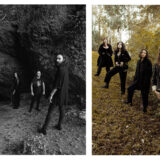 Read our chat with Piccolo below.

SPIN: Belfry, was an unexpected gem that expanded upon a lot of doom templates, a bit hazier than what would come after — where do you think Messa is now?
Alberto Piccolo: I think Belfry was a point from which we began to develop constantly. Some elements of it are still with us; others are gone, at least for now. We are constantly looking forward to what is coming and what we haven’t done yet, and we don’t like to repeat ourselves.

“Leah” from your last record, 2018’s Feast for Water, gained some traction that raised your profile — did that song propel or direct anything on this record?
In some ways yes but not completely. We wanted to say something different with Close.

The jazz connection is most obvious with the saxophone on “Orphalese,” aiming for a Angelo Badalamenti dark jazz vibe. What went into making that track?
The jazz element in our records is always present; that’s true, but [as] previously stated, we don’t like to repeat ourselves, and we wanted to say something different with our new record.

The dark jazz vibe was really present in Feast for Water, our previous chapter. On Close we started from where we left, but then we kinda moved on and decided to take the Rhodes piano out of the equation. “Orphalese” is the most “cathartic” song of the album, and it features the most exotic instruments we have on the whole record. The wind part in the intro and in the rest of the song is played on the duduk, an Armenian flute (similar to a clarinet in some ways), and our goal was to take the listener to the Mediterranean rather than into a NYC jazz club. We were not thinking about jazz at all.

There’s also more of an avant/free direction in “0=2,” and even some of the guitar in “Rubedo” heads in that direction too — it’s not just the sax lending to a jazzy atmosphere. What leads to using this discordance?
We really like stuff that’s far out, and for this record we wanted to have no boundaries. We actually discarded some ideas because they were too little far out. I think that in order to create an interesting dialog, you have to have discordance. Otherwise is just a lot of agreeing and not really saying something that has a rich meaning. We always try to find the disturbance element that creates contrast with the rest: acoustic versus electric instruments, loud parts versus quiet parts, jazz over doom, crystal clear vocals over distorted sounds — there’s power in contrast.

Where for y’all, on a personal level, did the connection between metal and jazz click? And what makes it still fertile ground for more adventurous metal musicians and fans to explore?
On a personal level, I never thought about myself as a metal guitarist/musician. I’m a blues guitar player. I love rock and metal music; I love flamenco and Arabian music, and I happen to [have] graduated in jazz guitar. I can’t help it really much; it’s just the way I have experienced music so far, and that’s how I play. Plus, I’m not the only one who likes jazz in the band. We all love it, so as soon as we feel it fits, we go for it.

Even more ostensibly “doom” songs like “If You Want Her to Be Taken” and “Pilgrim” take liberties most doom songs don’t. What are you looking to subvert with those songs? Where do you want to take doom?
We just do what is natural for us, but we always try to improve our music and think forward. For sure we try to push the boundaries in our own personal way, but those specific tunes are perhaps the ones which manifest our growing interest for different and slightly uncharted musical territories.

You’ve sprung forth into battle? Now what? Well, take some more metal with you…

Kontusion are a new death metal duo featuring Iron Reagan guitarist Mark Bronzino (who has also served in Ghostemane’s live band and Texas metalpunk institutions ANS and Mammoth Grinder) and D.C. punk drumming behemoth Chris Moore from Coke Bust, Disciples of Christ and Repulsion. Repulsion’s ramshackle brutality most heavily informs Kontusion — Moore and Bronzino don’t play so much as they splatter, bursting through four songs of decaying VHS scum on their self-titled debut. Nothing’s gonna get that stink off when you listen to this – don’t wear your good, four-sided long-sleeve.

Their video for “Unrelenting Pain” was directed by Faiza Kracheni, who has sung in notable Austin groups Hatred Surge, Mindless, and Body Pressure. Always gotta get a little Texas in this column, always.

File both of these under “they sound exactly how they’ve sounded for years and still kick ass.” Crowbar, who helped pioneer New Orleans sludge, sound as beaten down as they’ve ever been on their 12th album, and “Bleeding from Every Hole” most resembles their early thiccness. Midnight, from the Cleveland streets Harvey Pekar once roamed, is still the one-man black-thrash game to beat on this side of the Earth or anywhere else. Let There Be Witchery has all the right hooky, Venom-laden sleaze.

What is it with bands doing Carcass better than Carcass themselves now? A few months back, Pharmacist refined and upgraded Carcass’ early goregrind days, and now, Detroit’s Jesus Wept give Heartwork’s melodic death metal a 2022 polish with their second EP, Psychedelic Degeneracy. The leads on “Dispossession” are total Amott worship, and “God Fetish” nails an ideal death n’ roll balance, swinging without getting hokey.

The third album from French black metallers Véhémence carries a strong triumphant streak, built on upward melodic passages that flip Swedish melancholy on its head. And while Hyvermor’s rasp is on-point for black metal, it’s the clean choir vocals, most prominent on bookending tracks “De feu et d’acier” and “Par le glaive,” that really propel this into an angelic overload.