A Day in the Life of…Foy Vance

“I was devoted to music long before I realized I could do it and nothing else for the rest of my life,” says Northern-Ireland born singer Foy Vance. “The second the penny dropped I focused fully on music and nothing else.”

Foy’s newest album Signs of Life (released last September) was written during 2020, and while it reflects the sincerest, most raw depths of humanity, it does not go gently into the darkness. His soul-baring performances never fail to bring the light.

“Sol, my youngest son, was due the next day when my wife sat in front of me bathed in morning light and she had that look in her eyes that only pregnant women seem to have, and the first lyrics of the song came out without thought and the rest of it just worked itself out pretty quick,” he says, of the title track. “’Signs of Life’ was loosely based on an acronym of my son’s name, but then it made a lot of sense on many different levels. Having spent all that time cooped up making it and then birthing it into our new world.” The album was produced by Ed Sheeran’s Gingerbread Man Records. Foy has toured with Sheeran, as well as Elton John, Kacey Musgraves, and Alicia Keys.

He says that his songwriting process is now “like pursuing a hobby.” 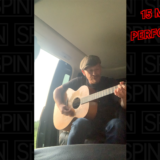 “I used to drag myself over the coals at times with a song, but now I realize the importance of remaining interested. If I’m not interested there is no way I’m gonna create something interesting. I don’t really sit down with a specific idea. It is more like going to a fun fair and taking a look around before you decide what ride to go on first.” His early influences were wide and varied: “My mum loved ‘50s crooner music, my dad loved folk and country and gospel and blues, my eldest brother collected vinyl and had everything from Meatloaf to Michael Jackson, second eldest brother collected old 8 tracks of trucker music and listened to The Who and The Jam, and the next brother to me was mad into punk and ska, so in his room, I’d hear The Specials, The Sex Pistols, The Clash, The Dammed, etc…. It all sounded like music to me.”

He describes his style now as“rooted in the tradition of song.” He is a beautiful and passionate performer, which you can see for yourself in his 15-Minute Live Performances which he did for us in January.

Here’s a day in the life of Foy Vance.

Every day starts with  Coffee.

To get going I always  Drink coffee and I like to sing in the mornings. I feel like it warms my body up and sets the tone for the day.

I don’t feel dressed without  My aftershave.

Before I start working I must  Be in the right head space.

Currently working on  New songs for the next record and also demoing some songs for another Americana-focused record. Aside from that I’m writing with a few folks for their projects which tends to keep me on my toes.

But I’d really love to be Doing exactly what I’m doing. I could do it with a little more sunshine that would be great but I’m not complaining.

I don’t know how anyone ever  Stays in a job or a relationship that they hate. We are only here a while and we’re such a long time gone…. I think as long as what you want to do doesn’t hurt anyone you should do whatever you want.

If I had to play one album on repeat, it would be Amnestyby Peter J McCauley.

The perfect midday consists of  A few quiet frames of pool after a morning of work.

To help get through the day I need  Silence. I also need music of course but silence in the day is vital.

Not a day goes by without speaking to My three kids.

My daydreams consist of  All kinds of wild shit that I will most likely never do but it’s okay to let your mind wonder and wander anywhere it will… You never know where you’ll end up or what you might find there.

In a perfect day, in a perfect world If you tuned every string on a piano perfectly it would sound like shit. Some strings need to be off-perfect before the piano sounds in tune. I suppose what I’m saying is, I don’t know if I fully understand “perfect”. How often have imperfections made something or someone seem perfect or at least better with that imperfection? I find that a lot making music, making mistakes is often times the catalyst to making the song what it is.

But just for the f**k of it…. Everyone would be free to be whoever they want, believe whatever they believe, love whomever they fall in love with, and everyone else that felt different just minded their own business and got on with their own happiness…. NOT BLOODY LIKELY.

I’ll always fight for  To say and do as I please…again only if it isn’t at the cost of someone else of course.

Currently in love with  Loads of people, but most of them are happily married to someone equally cool and are completely unaware that I love them so I don’t know if that counts?

Hoping to make time to watch  I don’t watch a lot of TV or even films at the minute but I like the sound and look of Squid Game. I also have planned to watch Fight Clubwith my daughter who hasn’t watched it before so I’m looking forward to that…what a film!

By my bedside I always have  A book.

To help get through the night  I sleep of course.

When I think about tomorrow, it’s always  Hopefully.