In support of her record that was released last year, Tori Amos will embark throughout North America on tour.

Amos is slated to kick off the tour on April 27 in Dallas and will run through June. General tickets go on sale at 10 am local time this Friday, February 4, on Amos’ website.

SPIN‘s Liza Lentini went on the record with Amos: “Ocean to Ocean feels like something stylistically new—big, sweeping, mythic—with a nod to her Little Earthquakes-esque earlier work.” 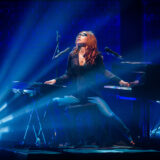 Lucky for Amos’ fans abroad—these are just the U.S. dates she announced today. Amos also plans to go from Ocean to Ocean and will tour in the UK and Ireland later this year.