Forewarning, The Smashing Pumpkins are set to take over the U.S. The band just announced the latest edition of their Rock Invasion Tour.

The 11-date stint kicks off on May 2 in San Antonio, Texas, and closes May 28 in Columbus, Ohio. The tour’s supporting act is Bones, yet a special guest for their San Antonio performance has yet to be announced. All tour information can be found on the band’s website.

Billy Corgan and company are also scheduled for a few festival dates this year, including appearances at Beale Street, Beachlife, Welcome to Rockville, and Summercamp festivals. 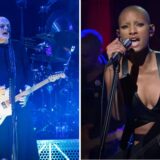 Last September, the group performed their hit “Quiet” for the first time live since 1994. The Pumpkins also announced the releases of two live albums, Live at the Viper Room 1998 and Live in Japan 1992, on vinyl last year.