Roosevelt Gets Bodies Moving and Hearts Racing on Polydans

If you’re longing for the kind of in-person connection that can only be found dancing with abandon in a room full of friends and strangers alike, Roosevelt’s got your soundtrack. Roosevelt is the moniker of 31-year-old German artist Marius Laube, who just released the deluxe edition of his third album, Polydans, which is a note-perfect antidote to pandemic-era gloom and doom, nodding to everything from the Bee Gees, yacht rock, French house and sleek ‘80s pop over the course of 10 feel-good tracks. The ramped up version has eight additional alternate takes and the club bangers “About U” and “On My Mind.”

“The theme of the record, and why I called it ‘Polydans,’ is showing these different perspectives on dance music,” Lauber tells SPIN over Zoom from the East Williamsburg apartment he’s been renting for a few months. “This time, I was a bit more aware of my influences and tried to write a few homages to these heroes of mine,” he says, citing Daft Punk, Air and ‘80s Scottish band Fiction Factory, whose hit “(Feels Like) Heaven” he covers on the deluxe edition.

Lauber played nearly every note of the music on Polydans himself in his Cologne-based studio, Tambourine Dreams, which he opened in 2019. There, he set up his gaggle of synths and instruments in a semi-circle and patched everything into his digital audio workstation, “so if I had an idea, it would take 10 seconds to record it.” The resulting album is tailor-made for festival settings, particularly on widescreen songs such as “Echoes” (wait for the killer transition at the 3:38 mark), “Sign” and “See You Again.” But it doesn’t skimp on more vibe-y detours such as the icy “Forget” and opener “Easy Way Out,” which boasts an organic, live-band feel.

“I’m proud of having evolved a sonic world that people associate with me, that isn’t even defined by a certain track,” says Lauber, whose frequently smiling babyface and blue Etudes cap make him look even younger than he already is. “I’ve established a sound where I could do a 90 BPM track but also a 140 BPM track with completely different instrumentation.” Adapting those studio-centric album tracks into live versions that can be played by four humans with only two hands each was a challenge, but Lauber likens it to “being the best cover band of yourself. I think now I’m way better at being the musical director of the band, so to speak. I see it as a fun thing to do. My focus is on producing the records, and now I have the confidence to figure it out for live performance.” 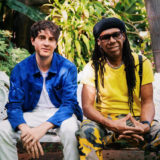 Fans continue coming aboard for the ride, especially in the U.S., where Roosevelt played to his largest audiences on a late 2021 tour (including selling out L.A.’s 1,200-capacity Fonda Theatre). A spring European run gets underway on March 2 in Germany and will be followed by more U.S. dates later this summer. A new single is due out in late spring as well — “a Roosevelt track with someone on it, who is a big hero of mine,” Lauber says, politely declining to reveal specifics. “I don’t usually have other people on my tracks. I think I like the albums to just be a personal statement without any features.”

“I know there’s a core of my fanbase that will keep being interested in what I’m doing,” he continues. “They’re not expecting me to write a certain song again. With a lot of acts, it is that way. People have expectations because they have one or two big songs. What I really enjoy is that I feel like I’ve got fans that are genuinely interested in my creative output, without expecting me to repeat myself.”