Musicians are taking over this year’s Oscars. The nominees were announced this morning, and singers, producers, and composers are up for the film industry’s biggest award.

Five generational icons, Van Morrison, Beyoncé, Billie Eilish, Lin-Manuel Miranda, and Diane Warren, are up for the Best Original Song category. Morrison grabbed a nom for “Down To Joy,” from Belfast, where Queen B is up for co-writing “Be Alive,” from King Richard with producer DIXSON.

This marks Beyoncé’s first-ever Oscar nomination. Eilish and her brother Finneas co-wrote the newest Bond theme, “No Time To Die,” and Miranda wrote the track “Dos Oruguitas” for Disney’s Encanto. If he wins, his Oscar will secure Miranda with EGOT status. This is Warren’s 13th Oscar nomination, making her the most-nominated woman who’s never won an Oscar. She was nominated this year for “Somehow You Do” from Four Good Days.

Miranda, Warren, and Morrison wrote their nominated tracks without any collaborators, marking the first time in 20 years that three or more songwriters were nominated for songs they wrote themselves. 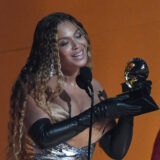 In some not-so-good news, neither Lady Gaga in House of Gucci nor Alaina Haim in Licorice Pizza received nominations, but both films received some of their own.

The Best Original Score category is also stacked, with Jonny Greenwood scoring his second-ever nod for Jane Campion’s The Power Of The Dog. He previously was up for Phantom Thread in 2018. This year, Nicholas Brittell is up for Don’t Look Up, Germain Franco for Encanto, Alberto Iglesias for Parallel Mothers, and Hans Zimmer for Dune.

Everyone’s favorite late-night band leader and Roots member, ?uestlove, is up for Best Documentary for directing the vibrant Summer of Soul.