Earlier this week, India.Arie announced she was pulling her music from Spotify because she found the way Joe Rogan talked about race problematic. To prove her point, the singer shared a video compilation that shows the controversial podcaster use the N-word 24 times in 23 different clips.

Rogan addressed the video in an apology uploaded to Instagram, calling it “the most regretful and shameful thing I’ve ever had to talk about publicly.”

After explaining that the compilation was sourced from “out of context” snippets from “12 years of conversations” on his show, he admitted “it looks fucking horrible. Even to me.”

“I know that to most people, there is no context where a white person is ever allowed to say that word, nevermind publicly on a podcast, and I agree with that now. I haven’t said it in years. Instead of saying ‘the N-word,’ I would just say the word. I thought as long as it was in context, people would understand what I was doing,” Rogan said, explaining that he would use the word in the context of reciting bits from comics like Lenny Bruce, Richard Pryor and Paul Mooney, or other people who said it. 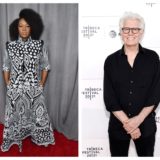 “It’s a very unusual word, but it’s not my word to use,” he continued. “I never used it to be racist, because I’m not racist, but whenever you’re in a situation where you have to say ‘I’m not racist,’ you’ve fucked up, and I clearly have fucked up.”

Rogan then took the opportunity to address another clip leaked from a deleted podcast episode where he likened being in an all black neighborhood to “Planet of the Apes” after seeing the movie with friends in Philadelphia.

“I was trying to make the story entertaining,” he said. “I did not, nor did I ever say that black people are apes, but it sure fucking sounded like that.”

“It’s a fuckin’ idiotic thing to say,” he admitted.

“I can’t go back in time and change what I said. I wish I could, obviously that’s not possible, but I do hope that this could be a teachable moment for anybody that doesn’t realize how offensive that word can be coming out of a white person’s mouth. In context or out of context. My sincere and humble apologies,” Rogan ended his video before reiterating that “it makes me sick watching that video.”

Of course, Rogan’s controversy did not start here. Neil Young was the first of various artists to remove their music from the streaming platform because of Rogan’s alleged spreading of COVID misinformation. Joni Mitchell and Nils Lofgren followed suit not long after, along with Graham Nash.