Caroline Polachek is back with her first single since 2020 with “Billions.” The track emplores elements of psychedelia with an angelic feature of London’s celebrated Trinity Choir. Polacheck recorded and released the song after months of fan anticipation from her frequent live performances of the song last year.

“Billions” was produced by Polacheck in collaboration with Danny L Harle. Along with the single, the singer released an ethereal accompanying video, directed by Polacheck and frequent visual collaborator Matt Copson.

“The overabundance of this world overwhelms me,” Polacheck said in a statement the themes of “Billions.” “Sometimes it seems like ultimate tragedy, the earth being pillaged and destroyed for it. Sometimes it seems pre-human, beyond morality, sublime. I don’t pick sides, I just live here, with you. How does it feel, being so rich?” 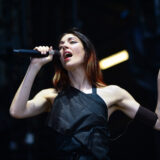 Caroline Polachek’s New Song ‘Sunset’ Will Give You Wanderlust

The release follows Polachek’s single “Bunny is a Rider” which rose to fan-favorite status and critical acclaim after its release last year, following her breakthrough album, 2019’s PANG! “Billions” gives fans a glimpse of what is to come for Polachek this year, showing that the pop superstar’s momentum hasn’t died down.

Polacheck will kick off performances for Dua Lipa’s Future Nostalgia tour tonight alongside Megan Thee Stallion and Lolo Zouaï. Her appearances on the tour include 28-dates, including a performance at the Coachella music festival in April. In addition to performances on the Future Nostalgia tour, Polachek will have headlining shows in Chattanooga, New Haven, Cleveland, St. Louis, Flagstaff, Santa Cruz, and Tacoma. Tickets are available for purchase here.