Bridget Everett Is Trying Her Best

“We’re all doing the best we can,” says Bridget Everett. A mantra of many, especially throughout the past two years, but particularly relevant for the cabaret singer/comedian/actress’ HBO comedy Somebody Somewhere. The series follows Kansan Sam (Everett, who was born in Manhattan, Kansas), who returns to her hometown and struggles to fit in while grappling with loss and acceptance.

She has a saving grace, though: Singing. By harnessing her passion — and meeting a like-minded group of outsiders —Sam embarks on a journey of self-discovery. Is she making all the right choices? No. But she’s trying — doing the best she can. Says Everett, “there’s going to be some hiccups along the way, for sure.”

Everett, 49, a longtime New York City cabaret staple, has found herself in the mainstream spotlight for the first time in her career. Her bawdy, musical act has gotten her attention before — opening for Amy Schumer, starring in Sundance darling indie movie Patti Cake$, recording a Comedy Central hour-long special — but with the critically-lauded HBO hit Somebody Somewhere, she’s getting the accolades she has long deserved. Below, Everett takes SPIN through the journey that led her to this career renaissance.

SPIN: You’ve had an unorthodox career path. How did it lead you to this point?
Bridget Everett: Honestly, I just stumbled my way here. In the beginning, all I was doing was singing in karaoke bars. That was really all that was happening for me. And then I met some of these performers from the downtown performance scene with cabaret artists and drag queens and stuff. When I moved to New York, I was like, “Oh, holy shit, this is it. This is my dream!” And I started getting involved in cabaret and that show just slowly — and I mean very slowly — built an audience.

As it progressed, you get a couple people from Hollywood or a couple Broadway so-and-so’s in the audience. I felt like I was a lot of people’s best-kept secret for a long time, but nobody really knew what to do with me. They just liked coming to see the show and I’d be like, “Oh so-and-so hot shit director’s out in the audience, maybe that’ll mean something,” but it just never really translated.

So I feel like people held me by the hand and tried and got me to where I am. And HBO saw me doing a show out at Largo in L.A. and they offered me a holding deal and we just figured it out. So I don’t know. I guess it’s dumb luck and hard work.

Well, it’s the hard work part that sounds like the key. Maybe there’s a tiny element of luck in there.
Oh yeah. For years and years, I was either waiting tables or I was doing a show every single night, and sometimes going to do a show after I got off of work. I was just doing it because those were my chances to get up and sing, and I just loved singing so much. I was thrilled for the opportunity and it was helping keep the lights on literally and figuratively to have that outlet.

One of the things about Somebody Somewhere is that you can tell Sam has a really interesting past. You can see that past in the show, even though that’s not what she’s doing right now.

I think you should feel what her life is. When you meet certain people, you can sort of see the table of contents on their face. You know what I mean? And Sam is a very emotional person who’s basically tucked everything away for a very long time. And slowly the air’s coming out of the balloon, but because all the feelings are so big inside of her, it’s very easy to pick up on where she might be trying to go.

And you use music as this catalyst to bring that out of her.
Her relationship to singing, as mine is, it’s everything. For me and for Sam, music is the love of our life. We didn’t want to make it a thing where it was like, “Oh, here comes the musical number.” It’s just a part of the fabric of her life because it’s part of her.

There’s a beautiful musical moment in the finale, but it’s not some featured number, it’s just part of the episode.
First of all, we didn’t want it to be, “the show ends on a song.” The show needed to end on a specific moment, which is how it ends. But it needed to feel like a very personal moment because she is finally communicating how she feels inside and the best way she can do that is through singing. I wrote that song sitting in the corner of my apartment. It’s one of the first times a song has really spilled out of me, other than a song called “Put Your Dick Away,” which came out pretty quickly too. I took the idea to Matt Ray who helped me finish the song, and we wrote a lot of songs together, but it just felt like it would feel too much like a musical to have the song be the end of the show. It just needs to be part of the ride.

Congratulations on getting a second season. Have you already started thinking about that?
Oh yeah. We’ve come up with a loose structure for season two and I really like it, and more music, more emotions, more laughs, and more struggling to find yourself within relationships that you sort of have to figure out.

Sam’s best friend, Joel (Jeff Hiller), is religious, but it’s not treated as a joke and it’s also not treated as a weird thing. It’s just part of his life. I can’t remember seeing anything like that on TV before.
Sam’s not a church person. She’s not religious at all. It just seemed like a good idea to have Joel, somebody that she basically falls in love with as a friend, have religion be an integral part of his life, and just how different they are, but they still come together. In my hometown, a lot of my friends are very religious and we somehow have found common ground, even though they know that I am — I don’t know what the right word is. Agnostic? Atheist? Somewhere in there, who knows. I believe in cats and dogs. Does that work? They save my soul, but just being able to love each other when you don’t have the exact same values.

I really love the show. It’s just a really nice show to watch.
Thank you. I appreciate that. Can that be the article?

Yes.
Just say, like, “I really like this show. It’s a nice show to watch.” With a smiley face emoji. And some tits and then we’re out. 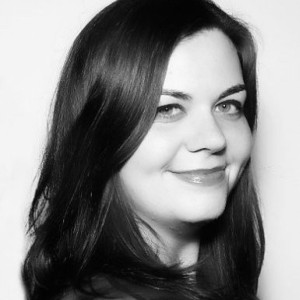