A Day in the Life of…Debbie Gibson

“I never consciously wanted it; it always just was my life!” Debbie Gibson says, of her life in music. “My parents bought a piano before they bought a couch, and I was enamored with it from day one. I always loved performing, doing theater, and talent shows but when I started writing and producing my original music, I felt like my biggest purpose in life was to put new music out into the world.”

At 17, she released her eventual triple-platinum debut album, Out of the Blue. The single “Foolish Beat” gave her the record of becoming the youngest ever woman to sing, write and produce a No. 1 hit. Two years later her second album, the double-platinum Electric Youth, spawned another No. 1, “Lost in Your Eyes”. In 1989 at the age of 19, having solely written all of her Top 20 hits, ASCAP awarded her the title of Songwriter of the Year, an honor she shared alongside Bruce Springsteen.

And she was only getting started.

Her tenth studio album, The Body Remembers (released last August on her label Stargirl Records) showcases the pop queen’s songwriting expertise, while reinventing “Lost in Your Eyes” as a duet with NKOTB’s Joey McIntyre. “Joey came up with the brilliant idea of sharing ‘Lost’ on the Mixtape Tour and it became an audience favorite and, though I was never sick of it to begin with, it breathed new life into it in a way I never imagined” she explains. “During the pandemic I brought up the idea of recording it and then Joe said, well if we’re gonna record together let’s plan some shows too! And we then did our mini Vegas residency and we have a few more tricks up our sleeves. Wink wink, hint hint. It’s a match made in heaven, a creative partnership and friendship!” 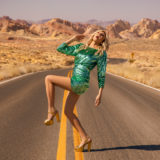 She approached it carefully. “Reinventing ‘Lost in Your Eyes’ was delicate because I wanted to keep the simplicity and heart of the original but give it a modern spin without trying too hard. Sean Thomas who is my musical secret weapon, at just 20 years old, was the guy to help find that line.”

We’d argue Debbie Gibson is Debbie Gibson’s very own secret weapon. Aside from being at the top of her game by the time she was out of her teens, she’s cool, she’s nice, and, now 51, she’s a pioneer in her field, serving as a poised example of how to become a writing/singing/producing teenage superstar.

What’s more, she’s humble: “I dare to go onstage live and unfiltered and unscripted which is exhilarating and it connects me to people through music and communing in a way that is the gift of a lifetime.”

How does she feel about being called a legend? “Ahhhh, that is amazing… thank you!” she says. “I feel very humbled and very grateful. My knee jerk is to make some self-deprecating remark but, I am going to try something new and graciously accept the compliment. I feel like I’ve worked hard to gain my success the old-fashioned way… through hard work and perseverance and I always try to do so with a positive attitude and with kindness towards others. I love people, I love music, I love travel, and I live a life which allows me to combine all my passions. I am a very, very lucky girl.”

Here’s a day in the life of Debbie Gibson.

Every day starts with  Dog kisses.

Breakfast consists of  Eggs and coffee. The rest varies!

To get going I always  Take my dogs out into the yard for some fresh air and joy.

Before I start working I must  There is no must! If feeling creative, I stumble into my studio, eyes half open in a nightgown and hit it.

Currently working on  My first ever holiday album.

But I’d really love to be  Doing exactly this.

I don’t know how anyone ever  Gets out of bed to do a job that goes against your beliefs.

If I had to play one album on repeat, it would be  Billy Joel’s Cold Spring Harbor

The perfect midday consists of  A nap.

To help get through the day I need  Naps.

Not a day goes by without speaking to  My Manager, friend, and biz partner Heather.

My daydreams consist of  Having an animal rescue/ranch/studio in the middle of nowhere.

In a perfect day, in a perfect world I am surrounded by music and animals.

Currently in love with  My sisters.

Hoping to make time to watch Summer of Soul Directed by Questlove.

By my bedside I always have  Homeopathic remedies.

To help get through the night I  Watch TV with my dogs.

When I think about tomorrow, it’s always  Another chance to evolve and celebrate life.