As the Omicron variant of COVID has wreaked havoc on society, the Recording Academy has announced that it is pushing this year‘s Grammy Awards. This is the second year in a row that the ceremony has been pushed back on account of COVID.

In a statement sent out on Wednesday, the Academy outlined its decision, which you can see below.

After careful consideration and analysis with city and state officials, health and safety experts, the artist community and our many partners, the Recording Academy and CBS have postponed the 64th Annual GRAMMY Awards Show. The health and safety of those in our music community, the live audience, and the hundreds of people who work tirelessly to produce our show remains our top priority.

Given the uncertainty surrounding the Omicron variant, holding the show on January 31st simply contains too many risks. 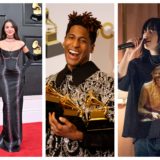 We look forward to celebrating Music’s Biggest Night on a future date, which will be announced soon.

As for the nominations itself, Jon Batiste led all nominees with 11 nods. Justin Bieber, Doja Cat, and H.E.R. have eight nominations while Billie Eilish and Olivia Rodrigo picked up seven apiece.

Last year, the ceremony was pushed to March at what was then known as Staples Center. This year, the event was supposed to place at the same venue, now called the Crypto.com Arena, on January 31 in Los Angeles.

A new date has yet to be announced.