For some recording artists, the pandemic and pop music made two strangely productive bedfellows. Especially, of course, for any composer with a deep misanthropic streak, like Mark Oliver Everett, aka E, the frontman for the quirk-rocking, lower-case eels. He’s no stranger to tragedy, like the early death of his renowned physicist father, Hugh Everett III, and the later passings of his sister and mother (pain cathartically numbed in his band’s aptly-dubbed Electro-Shock Blues in 1998).

Darkness, depression, and disappointment have hovered over his work for a pair of solo sets and 13 eels efforts, up until last year’s Earth to Dora. That album touched on his recent divorce and new life as a single dad, going into lockdown with his young son, Archie, and two tiny new dogs that (he reported uneasily last year) don’t bark so much as they shriek. But he found inspiration in the ensuing ennui, and actually riveted together a sturdy new followup, Extreme Witchcraft. As it turns out, the 14th eels disc is one of the most rollicking, down-and-dirty blues records he’s ever made.

It helps that the outing is co-produced by crafty PJ Harvey axeman John Pariah. Loud, bone-crunching guitar riffs dominate almost every track, from the surly opener “Amateur Hour” through a pounding “Good Night on Earth,” as well as increasingly nastier growlers like “Steam Engine,” “The Magic,” and “Better Living Through Desperation.” Even the more polite entries, such as an initially-iridescent twinkler dubbed “What It Isn’t,” quickly devolve into a brutally-screamed chorus of “Shut up!”

Naturally, the album’s title originated in a typical Eccentric place, reflecting his lifelong habit of filing away strange facts he stumbles across. 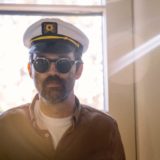 “A few years ago, I happened to see a news story about Beyoncé being sued by her ex-drummer, and among the charges was that Beyoncé practiced ‘extreme witchcraft,’ which I thought was so funny,” the 58-year-old relates in his usual droll, deadpan delivery. “I was like, ‘Beyoncé? Really?’ I mean, maybe if you were an ex-employee of Led Zeppelin that might sound believable. But I just loved those two words together, and now I’ve finally found a way to use ‘em.”

SPIN spoke with the eels leader ahead of Extreme Witchcraft‘s release to learn more about the non-Beyoncé elements of the new album.

SPIN: This album is like your rocking blues record from hell. What mood were you in when you wrote it?
E: The mood to rock in hell.

When we spoke early in the pandemic, you were navigating your way through your [4-year-old] son’s favorite shows, like Paw Patrol and Peppa Pig. What’s changed?
The only thing that’s changed is the TV shows. And it’s sad that he’s graduated from Peppa Pig, which is a shame for me because I could watch that forever. But you know — every week it’s some different obsession. He’s really into YouTube right now, and it’s weird how kids would rather watch videos of kids playing with toys than actually play with toys.

Are the songs, which start with “Amateur Hour,” sequenced in the order you wrote them? And that track seems to be asking, “Am I actually still a professional?”
Well, that’s speaking more in romantic terms than referring to my profession. And I rarely run them in chronological order — “Amateur Hour” just felt like a fun opener.

And on an average cut, like “Good Night on Earth,” there are so many inventive guitars at work, especially the vibrato on the bridge — is that you or John Parish?
That’s John Parish, and that (bridge) is just so cool. So that song is sort of the opposite of rocking in hell. It’s about the fact that we’re all going through a tough time right now, obviously, the whole world is. But there are moments that are so good, and I was just realizing one evening, “You know, the world is shit. But I’m having a pretty nice time right now — it’s a nice evening, so let’s appreciate the good stuff.”

And obviously, during such dark times, a lot of us thought, “Hey — it’s a pandemic! So I’ll eat anything I want to!” Hence your tune “Strawberries & Popcorn.”
Well, the original inspiration for “Strawberries & Popcorn” is different than what’s depicted in the song. Having a 4-year-old kid, a lot of the time you’re just focused on feeding him, and sometimes you forget to feed yourself. And one evening, I was hungry and I hadn’t had anything for dinner, and I was too tired to make anything. And I looked at the kitchen counter and saw some of his leftovers — a bowl of popcorn and a bowl of strawberries — and that’s where a lot of my meals originate anyway, is his leftovers. And I just thought, “Fuck it. I’m gonna eat that for dinner!” And I quite enjoyed it, and I can highly recommend it — it’s a great sweet and savory combination, it turns out. And then I turned it into a different story for the song, about a guy who’s found himself recently independent, and he’s trying to celebrate his newfound independence. But it’s not all good.

It seems like you’re speaking in bigger metaphors here, like on “The Magic” and “Stumbling Bee.”
“Stumbling Bee” is definitely a metaphor. I think when I wrote it, I wasn’t thinking about this, but now I think it might be just a Southern California thing, that you see a bee out in November. In the harsh winters of Virginia that I grew up in, I don’t think you’d ever see a bee out in November. But I just saw one in January the other day — there are a couple of stragglers that were still out in the winter here, but they seem like they were drunk and trying to fly, but they’re having a hard time.

What’s the “Steam Engine” represent? And that is easily the dirtiest, meanest song on the record.
Yeah, that’s one of my favorites. But I don’t think I was aware when I was writing of what I was thinking of. But when I look back on it now, I think it’s about, in general, just mortality, and how we’re all getting older. And you know, it’s like that John Prine song “Hello in There,” which is about, When you see an old person, say hello in there — when you see an old lady walking down the street, you just think, “There’s an old lady.” But she probably doesn’t feel like what she looks like on the outside, you know? And that’s something I can definitely tell from my own experience with aging, that that spark of your younger self is still there. You still feel vibrant, even though you look different and you’re aging. So I guess I was just meditating on that in some way.

How are Manson and Bundy, your two terrier-mix yappy dogs?
They’re great. And part of the effect of being alone in the pandemic for so long is that I’ve turned into the dog equivalent of the Crazy Old Cat Lady — I’m just so attached to them, and they’re just so important to me. I wasn’t ever really a small-dog person, but now I’m just a huge fan.

I think I hear one barking on the album.
That’s right. You hear both of them, in the song “What It Isn’t.” The mailman happened to come, right when I was recording the vocal. And they barked right in that place, which was kind of a perfect place — right in between the first chorus and the second verse. And I just thought, “Ah, well, alright.” I always put Bobby, Jr., my old dog, in our videos, and he sang on a song. So I just thought, “Well, I’ve given Manson and Bundy their shot in the spotlight.” And it’s almost like they asked for it by doing it right at that particular moment.

When it comes to winning and losing, I dunno about you, but I feel like a winner just to still be here after these past two years.
Oh, absolutely. And I am constantly amazed that I am one of the lucky few people in the world who gets to do what they want to do for a job. When I was young, I had no hope for the future, for my future. So the fact that I got to make one album is still amazing, let alone all these other albums and the fact that I’m still here, particularly with my family history. So I’m always hyper-conscious of like, “Wow! I’m still here! This is a miracle!” I am always grateful.