Bono recently discussed his dislike of U2’s band name, including most of their discography and his own singing voice.

In an appearance on the Hollywood Reporter‘s Awards Chatter podcast, Bono says he only learned how to sing “recently,” and admitted he turns off the radio when an early-era U2 song comes on because he can’t listen to his own voice.

“I’ve been in the car when one of our songs has come on the radio and I’ve been the color of, as we say in Dublin, scarlet,” Bono admitted. “I’m just so embarrassed.”

He continued his self-criticism by saying he “still” doesn’t like U2’s name over 40 years later. 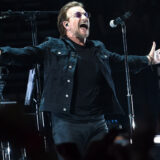 “I really don’t. But I was late into some kind of dyslexia,” Bono said. “I didn’t realize that The Beatles was a bad pun either. In our head it was like the spy plane, U-boat, it was futuristic – as it turned out to imply this kind of acquiescence, no I don’t like that name. I still don’t really like the name.”

He didn’t criticize the rest of the band, though. Bono still believes “the band sound[s] incredible,” and added that “Vertigo” is the track he is most proud of due to the way it evokes a live crowd. But in another bash on his own accord, the 61-year-old “Where The Streets Have No Name” vocalist says his voice is now “strained.”

“I do think U2 pushes out the boat on embarrassment quite a lot and maybe that’s the place to be as an artist,” he says. “You know right at the edge of your level of embarrassment.”

The frontman even rehashed the band’s 1980 debut, Boy, and that it contained “very unique and original material,” in terms of lyrics. “But I don’t think I filled in the details,” Bono continued, “and I look back and I go ‘God’.”