Today, alt-J released a video for “Hard Drive Gold,” the third song off their upcoming fifth studio record, The Dream.

The Mercury Prize-winning trio is set to release The Dream on February 11 through Canvasback/Atlantic, and it is available for pre-order now. The new track’s accompanying video is the band’s singer/guitarist/songwriter Joe Newman’s directorial debut, and his partner, Darcy Wallace, co-directed.

“’Hard Drive Gold’ is a slightly tongue-in-cheek song written at what we thought was the height of the cryptocurrency gold rush,” alt-J’s Newman said in a statement. “It’s the story of the ultimate childhood fantasy, the schoolboy who becomes a millionaire overnight, and the different interactions he has with people in his life from teachers to neighbors. How ironically you interpret its message is entirely up to you…”

“Hard Drive Gold” follows the recent releases of “Get Better” and “U&ME,” which debuted in November. Following the unveiling of the newest track and after the album’s release, the Grammy-nominated band will embark on an arena tour of North America, alongside Portugal. The Man, beginning in February in Pittsburgh. 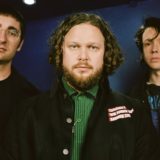