Exit Interview: Japanese Breakfast Reflects on a Best Selling Book, Her Grammy Nomination and the Activity That Kept Her Calm

If you told Michelle Zauner in early 2021 that she’d dominate the year-end lists — both in music and books — she would’ve thought you were nuts. But here we are. And she had a perfect spot to soak it all in: Onstage in early December during a warm Mexico City evening, her confident stage presence seemed to neatly encapsulate that trajectory as Japanese Breakfast.

Performing on opening night at House of Vans in the Mexican capital city, the singer-songwriter let loose with the controlled intensity built up from a year in lockdown. Zauner led the sold-out crowd in the concert-venue-turned-skatepark in singalongs and anthems, even managing to slide in a cover of the Cranberries’ beloved 1993 alt-rock hit “Dreams.”

Earlier in the day, before dazzling those thousand-plus fans, Zauner calmly took stock of her big year. Even as chaos reigned supreme outside of her dressing room — folks frantically putting the finishing touches on opening night appearances, skateboarders gliding down the hall — Zauner was focused on one thing: preparing for a killer show.

Sporting thin, round glasses and a vintage Cheetos T-shirt she picked up in Seoul, Zauner couldn’t help but beam when we first started chatting. “This is the first time I’ve ever been at the top of a list,” she said, referencing “Be Sweet” landing the top spot on our Songs of the Year list. When I also mentioned that her terrific album Jubilee landed in the No. 2 slot, she couldn’t help but sport a satisfying grin as well. 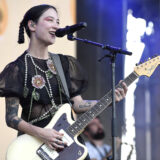 Zauner should get used to the praise. It’s rare enough to have a critically lauded album, but she also has a best-selling book with Crying in H Mart, one of the year’s most notable literary titles. The book, which earned praise from The New York Times, is doing so well that it’s eventually headed to the big screen.

Sitting in a cushy-sized room on the top level of a concert venue was one of the rare places (and times during a whirlwind year) that Zauner could remain still enough to look at all she accomplished in 2021. Speaking with SPIN, she also glanced forward to the next phase in a grand ascent that she still can’t believe hasn’t leveled off.

SPIN: So when you put out first your book, and then the album, did you expect the response to be as overwhelmingly positive as it has been for you?
Japanese Breakfast: Definitely not. I feel so overwhelmed by the kind of double hitter of a successful book and record. I just assumed at least one of them…would hopefully stick. So it’s nice that both did so well.

Not only did they both succeed, you got a film deal out of your book, too, right?
Got a film out of it and put out a game soundtrack. It’s just been a very, very fruitful year.

Especially that they were both in kind of still, kind of sort of, but not really, in the thick of the pandemic. What was your process going into 2021? Was there any hesitancy or nervousness or why or more excitement than like, let’s just get it out there and see how it goes with these things?
I think if anything, I felt a bit more invincible, just because I had held on to it for so long. Both projects were just such a long time in the making. And I had sat on them for so long that it just felt like nothing could hurt me anymore. I was so excited to let them go and be out in the world and then move on with my life. That’s sort of how I felt going into 2021. Everyone got so used to things like canceling and shifting around and sort of reprioritizing what was important in their lives.

I felt a looseness that I hadn’t felt before where it was just like, well, the world will do what it will at this point with it. I’ve sat on it long enough. And it ended up being really the right decision for us.

How long were you sitting on it for?
It was supposed to come out in July 2020 and we pushed it a full year. At the time to I was like, ‘oh, you know, a couple of months between book and record is pretty significant and people will stop talking about the book by then and we’ll have a record. They were companion pieces in that way.

Was it meant to be that way? At least in terms of the content of the album and the book. Was it always supposed to have this similar thread or DNA?
No, I didn’t think of them really. I do think that mentally working on this book made me feel different going into this new album. I felt just overjoyed, getting to work on record again, after sort of slogging away for so long alone. I was returning to familiar that when I started working on this record. I had gotten to the point where I had said everything I needed to say about this experience that’s really dominated my work for the last five years. And so it was time to kind of write something totally new.

What’s it been like getting back into it this year? Like, you know, was there any hesitancy like a slight nervousness performing live again?
Surprisingly, I was very nervous. Especially after a year and a half of not seeing many people and then suddenly playing to our biggest crowds. I’m not someone that’s typically had too much performance anxiety, but for the first time, I think I had to really grapple with that this year I don’t know if it’s partially because of the pandemic. But, probably both because of the coming of the pandemic and also just the hitting the level that we are now — I never anticipated.

Even in my wildest teenage dreams. I never thought we would be on a [tour] bus. I never thought we’d be playing to thousands of people overnight. It’s surpassed everything I thought for myself. I think that there’s this constant pressure of just like how do I take advantage of where I’m at right now?

It seems like you’re taking every all the positiveness of this demand that people want to see you and taking it as the positive thing it should be instead of the anxiety could be if that makes sense.
It’s a double-edged sword. I think in some ways, that kind of nervousness keeps you on your toes. It keeps you pushing yourself, and it makes it so you’re never taking anything for granted. It’s also like, be so nervous all the time about doing your best.

What has been the most cathartic thing about performing this year?
Oh, God, like all of it. I know it’s a boring answer. I just miss the heartbeat of the band and crew. Watching everyone have their individualized tasks, and it all coming together to accomplish something huge every single night. Of course, seeing the kids and having songs that you wrote some back to you and yeah, just getting to do it all.

What about the Grammy nomination?
I was definitely caught off guard. It felt like a one in a 1,000 kind of chance. I definitely felt like a dark horse.

Are you going to the ceremony?
Oh fuck yeah. At this point, I’m in such good company if I lose it. But yeah, I’m excited to go and it’s such an honor.

What was one of your favorite activities of 2021 that people may or may not know about you?
I got really into online chess.

How did you fall into that?
I started going to chess clubs when I was in fourth grade. From fourth grade to seventh grade, I was in chess club. Then I was a preteen and lost interest and wanted to have a social life. then, of course, in 2020, when Queen’s Gambit came on, I was reminded of my love for that game. At this point, all of my interests and passions have transferred into jobs. So chess is kind of this nice thing that I have no real aspiration for. It’s just a frivolous thing I can enjoy.