The remarkable story of 14-year-old Nell Smith begins at a Flaming Lips concert. As a fan growing up attending their shows, Smith is now joining forces with the Lips. Smith and the Lips announced Where the Viaduct Looms, a record of Nick Cave covers that is set to release November 26.

Smith first met singer Wayne Coyne at a Flaming Lips show in Calgary three years ago. A regular at Lips’ concerts always bearing a parrot costume, Smith was eventually recognized by Coyne, who sang a David Bowie cover directly to her in Calgary, and Smith sang back. Staying in contact with Smith through her father, Coyne inspired Smith to pick up the guitar and write her own songs. Coyne planned a trip to record with the band in Oklahoma and suggested that Smith record some Nick Cave tracks and email them to the Lips so they could record backings. This is the result.

“It’s always great to meet excited, young creative people,” Coyne said. “With Nell we could see she is on a journey and thought it would be fun to join her for a while and see if we could get things going. It was a great way to connect with her and help harness her cool attitude to making music.”

The LP is comprised of nine cover versions of Cave’s hits, and today, they shared a video for “The Ship Song.” 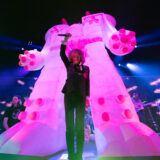 The first track they recorded was “Girl in Amber,” which Smith shared last year. Cave himself responded to the cover on his website: “This version of ‘Girl in Amber’ is just lovely, I was going to say Nell Smith inhabits the song, but that’s wrong, rather she vacates the song, in a way that I could never do,” he said. “I always found it difficult to step away from this particular song and sing it with its necessary remove, just got so twisted up in the words, I guess. Nell shows a remarkable understanding of the song, a sense of dispassion that is both beautiful and chilling. I just love it. I’m a fan.”

Where the Viaduct Looms will be released on Bella Union / [PIAS] and was mastered by Dave Fridmann at Tarbox Road Studios.