Brandon Boyd hadn’t actually planned to make a record during the 2020 COVID lockdown. The frontman for Incubus was content staying in his home in the Santa Monica Mountains, painting and spending time with his girlfriend. Each afternoon during lockdown, the two of them—both die-hard musicophiles—would share their latest musical discoveries with each other. It was during one of these sessions that set Boyd on the path to his new single “Pocket Knife” and his attendant third solo album, Echoes and Cocoons, slated for release in March.

“It was a really strange period of time,” Boyd says over Zoom. “My girlfriend moved in with me over the course of the pandemic and she and I started sitting down every afternoon, having tea and we’d play music for each other. Just like, ‘Oh, I love this song, it just came out’ or ‘Check this one out from 60 years ago.’ We were just intellectually challenging each other with our musical tastes. She [played] me Angel Olson, who I had heard of and I super-enjoyed what I heard over the years. But she played me her newest record and I was struck by it. The songwriting was awesome, and I love the way that she sings and writes. But there was something about the production of it that I was—for lack of a better way of describing it—I was almost envious of.”

Boyd learned that Olson’s record was helmed by John Congleton, the producer/writer/performer who has made definitive records for more than a few vibrant artists (St. Vincent, Lana Del Rey, Amanda Palmer, Sigur Ros) nestled in your playlists. Curious and rejuvenated, Boyd cold-called Congleton to gauge his interest in collaborating.

“I was like, ‘Well, what are you doing?’ [Laughs.] I really like the records you make,” and he was like, ‘I’m casually working on a few things here and there. But why? What’s up?’ And I was like, ‘Didja ever write music with a dude like me?’ [Laughs.] And he was like, ‘Sure, what you have in mind’ and we just started chatting. We did a couple of FaceTime sessions and started sending ideas back and forth. A handful of months later, we had an album that we both really liked.” 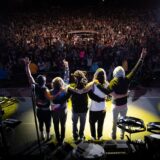 While “Pocket Knife” might reintroduce Boyd to the world in a decidedly AOR context, it’s genuinely an anomaly within the album’s other tracks. Boyd and Congleton delivered a record that’s curiously textured (“Dime In My Dryer,” “Fly On Your Wall,” the spiritual hillbilly electro of “More Better”) and as magnificently cinematic as a James Bond movie set in 2040 (“Two Months And A Day,” “A Better Universe”). Hipster Record Collector Alert: There’s a cover of “The End of the World,” the 1968 single by ‘60s Greek prog outfit Aphrodite’s Child. At various junctures on Echoes, Boyd’s chilled-out persona disappears, striking out with decidedly pointed lyrical invective (“It’s a better universe without you in it/did you read the book or did you just see the movie?”) and serious joy deficit (“Ad Infinitum,” “New Dark Age”).

“It was the weirdest record I’ve ever recorded,” Boyd admits. “The circumstances on planet Earth were really strange, which were inspiring different types of creative obligations. And some of the song stuff was coming up: the feelings about the place that we were culturally and [socially] speaking in, but also emotionally being in these long stretches of time where I didn’t see anybody. Like you’re wanting to go outside and wanting to hold another person. Being denied that very basic human instinct was inspiring in certain ways. It’s so funny, because [John] and I didn’t even meet in person until the record was mastered.”

Of course, the arrival of Echoes and Cocoons doesn’t mean the demise of Incubus. Boyd says that the band will resume touring in 2022. “We toured just a little bit this year,” he says. “It was a toe in the water in this new kind of COVID landscape. It was fun, but also a little frustrating. We had got COVID in the band camp within like, four days, and we had to postpone shows again. But our plan for next year [is that] we’re going to go back out starting in March for a small handful of shows and a couple of festivals. And then we’re hoping to be on an actual tour in the summer.”

It will be after that trek that the members of Incubus will determine whether they’ll return to the studio for the follow-up to 2018’s 8. Not surprising to the people who know him, Boyd’s laid-back, optimistic, do-good-work personality is quick to embrace the creative potential of outside divisiveness as a tool of discovery and learning.

“There are times when Incubus as a band will sort of drift more seamlessly back into like, “Oh yeah, this sounds like us, you know?” But then there are times when we collectively drift into these areas where we’re feeling creatively frustrated/rebellious. And it’s like, ‘We can’t do that right now.’ I just can’t. I won’t. Sometimes it creates tension in the band, but sometimes we all line up and it’s like, ‘Yeah, let’s do something completely different.’ I know this not only for myself as a musician and an artist, but also for all the guys in my band and what we’re capable of doing collectively. It’s fun and energetically exciting to play like loud, heavy music. But it can be limiting and it can feel a little bit like you’re wearing shoes that don’t really fit you anymore sometimes. So I still love making that kind of music, but I also love venturing off into strange directions and exploring new caves and digging down to the bottom of different sandboxes, trying to find the floor.”

While the pandemic had many artists in various forms of malaise and fear of the unknown Brandon Boyd completely maximized his COVID-imposed staycation. For Boyd, Echoes and Cocoons also portends a sense of freedom from the expectations and perceived obligations faced by artists who have been immersed in culture as long as he has, regardless of genre. On his third solo release, Boyd has completely evaded the amber various quarters may wish to deep-freeze him in. Not today, X’er.

He laughs in the most polite and resigned way. “I just had this random thought. The finger that I used to check which direction the wind was blowing got lopped off in 2010. I almost don’t want to be too cognizant of what people are expecting of me.”